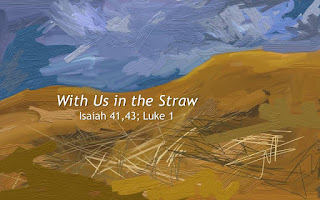 One of God’s greatest and longest-enduring promises is to not leave or forsake us, but to be with us. That promise is captured in one of the names given to Jesus: Emmanuel, which means “God with us.”

And it’s more than just being near or next to us. One of my friends in ministry likes to say that God has come ALL THE WAY DOWN to us. Today we will see that God has indeed come all the way down among us and into our mess. 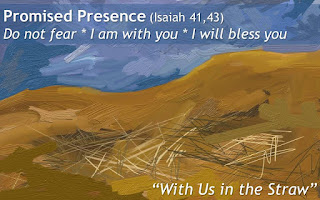 We start in Isaiah, in chapters 41 and 43. We’ve talked about the context for this before. It is some years after David and Solomon and God’s people have been disobedient, struggling, and have lost much. They have been conquered by foreign powers, taken captive, and scattered abroad. Indeed, much of what happened was a consequence of their disobedience and disregard for God. It would have been easy to draw the conclusion that God was done with them. (Have any of you ever drawn that conclusion about your own life?)

But God speaks through His prophet, Isaiah, to say a series of astounding – and comforting and encouraging – things.

What do you hear over and over? – “Do not fear.” And it’s not just, “Don’t be scared; pull yourself together.” It is, “Do not fear; I AM WITH YOU… I’ve got you; I am with you; I am your God.” God has not abandoned His people, just as God hasn’t given up on you. God is the “Redeemer” and the “Holy One of Israel.”

Again, “Do not fear… do not fear… I am with you.” This time, God gives context to his presence. It’s not just “with you” but with you in the most difficult places and parts of life: the raging water, the burning flame. And not only does God still claim His people “by name”; He also promises to bring the scattered people (and their children!) home.

These themes are echoed in 100 more places in the Old Testament. My mind goes to the 23rd Psalm and the declaration of the song-writer, “Even though I walk through the valley of the shadow of death; I will fear no evil, for you are with me; your rod and your staff, they comfort me.” (v. 4) That is an example of someone trusting God’s promise and presence and describing that trust. But all the texts I chose today are God’s words to us: “I am with you; do not fear; I bring you blessing.” 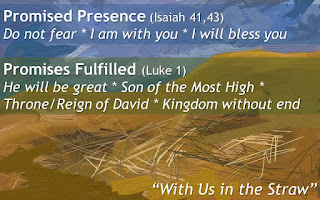 In Luke 1, we hear the familiar Christmas story of the Angel coming to Mary. Though there is much to be learned from Mary there, today I want to focus on what God is saying and doing. Listen closely as I read it:

26 Now in the sixth month the angel Gabriel was sent from God to a city in Galilee called Nazareth, 27 to a virgin engaged to a man whose name was Joseph, of the descendants of David; and the virgin’s name was Mary. 28 And coming in, he said to her, “Greetings, favored one! The Lord is with you.” 29 But she was very perplexed at this statement, and kept pondering what kind of salutation this was. 30 The angel said to her, “Do not be afraid, Mary; for you have found favor with God. 31 “And behold, you will conceive in your womb and bear a son, and you shall name Him Jesus. 32 “He will be great and will be called the Son of the Most High; and the Lord God will give Him the throne of His father David; 33 and He will reign over the house of Jacob forever, and His kingdom will have no end.” 34 Mary said to the angel, “How can this be, since I am a virgin?” 35 The angel answered and said to her, “The Holy Spirit will come upon you, and the power of the Most High will overshadow you; and for that reason the holy Child shall be called the Son of God. 36 “And behold, even your relative Elizabeth has also conceived a son in her old age; and she who was called barren is now in her sixth month. 37 “For nothing will be impossible with God.” 38 And Mary said, “Behold, the bondslave of the Lord; may it be done to me according to your word.” And the angel departed from her. (Luke 1:26-38)

The angel bears the news, greeting Mary and beginning with the same three things promised to all God’s people through Isaiah:

Then the angel says these things: “He will be great and will be called Son of the Most High; and the Lord God will give him the throne of His father David; he will reign over the house of Jacob forever, and his kingdom will have no end” (v. 32-34)

Have you ever heard that promise God made to David? God would make an enduring house, and that wasn’t in reference to the Temple, but to David’s royal line. And though David’s children and the people of Israel were notoriously disobedient, God’s promise is good. That’s part of the reason for the genealogies in the beginning of Matthew and Luke – to show that Jesus is of the royal line of David.

But he will also be born of the Holy Spirit and will be a “holy Child” who “shall be called the Son of God.” (v. 35) With this birth God has come near, not as blazing deity or as invincible earthly king (both of which people expected in various ways). Rather, God came after us and came among us with this almost scandalous “low birth.” 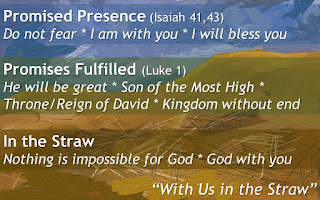 That the God of Creation and the heir of King David would be conceived by a virgin not yet married and born into the straw of a stable in Bethlehem with shepherds and sheep gathered as witnesses while SIMULTANEOUSLY fulfilling the Old Testament promises and prophecies should be ample proof of the angel’s words in verse 37: “Nothing impossible with God.”

Then we see that Mary’s experience of God’s power and presence is intimately tied to her hearing and responding to God’s Word, here spoken by the angel. Mary hears all this and responds, “Behold, the bondslave of the Lord; may it be done to me according to your word.” (v. 38)

So what does these old stories mean for us today?

I continue to be amazed at the consistency and continuity of the message from the earliest pages of the Old Testament through to Jesus and beyond. That story is this: the perfect and powerful God made this world and humanity with it, inviting us to a unique relationship as those “in His image.” We made (and continue to make) a mess of it, but God did not and has not abandoned us. Nor has God simply waited for us to fix it or find our way back to His presence and blessing. Rather, God has come running after us, at times as unseemly and ungainly as the old father running out to meet his errant son and then slipping out of the party to invite his prideful son in.

Further, God has come down among us in Jesus, down in the straw. Someone asked me recently why it was important that Jesus experienced the suffering, temptation, and limitations of humanity. After some pondering, I think that it was not important for Jesus to have that experience, but for us to know that Jesus had that experience. With that, we see and know a God who we can trust has seen and known us, not from a privileged position, but from our own position.

With Jesus, God has come down in the straw with us. He is with us even now; with YOU even now. And whether you’d describe your life and your experiences as straw or a raging river or a burning fire or the valley of the shadow of death, God is with you even now. Don’t be afraid.

God is with you. Do not fear. In Him – in Christ – there is also the blessing of knowing, not only is God with me; I am with God. Amen.

Previous
Christmas is Coming!
Next
Foundations of Faith

August 14 Prayers of and for the…