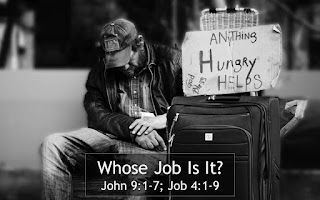 “Will work for food!” Or sometimes just, “Need food.”

That person on the side of the road, at the intersection – with the sign wanting food – ever wonder what they did wrong to end up there? I will admit to that line of thinking. How about you?

We are in good company… that’s essentially the question Jesus’ disciples asked him in John 9. They were leaving the Temple after something of a confrontation there. That’s a story for another day, but it ended with some taking up stones to throw at Jesus for blasphemy – claiming too much about himself and God. And as he and the disciples left the Temple, they passed a man blind from birth.

The disciples asked him whose fault it was the man was blind. Did he sin, or did his parents sin, to cause the blindness? I’m not even sure how that would work for it to be the man’s sin, since he was born blind. But this was a common belief of the day, that difficulties in life, like blindness, were a direct result of sin.

In our day we typically do not believe that sin causes things like blindness or deafness, though I suppose there are some choices like drug use that can cause physical manifestations when a baby is born. What is much more common and pervasive, though, is looking at someone like the man or woman with the cardboard sign and assuming they must have done something wrong – sin, if you will.

We’re going to look with that assumption today. It is founded on a “misplaced hope” that we are the source of our own salvation. That may sound strong, but let’s unpack that a bit. 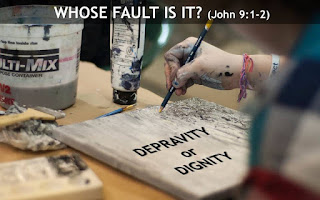 Now human sin CAN cause suffering, like the consequences of driving too fast may be a wreck. Or the consequence of drug use may be physical harm or loss of a job or homelessness. But that’s a little different than what the disciples asked Jesus. They made an assumption that ALL suffering is caused by sin, and that is simply not the case. Jesus makes that clear.

Neither does Jesus say that the man or his parents had not sinned. The scriptures make it pretty clear that everyone sins – all fall short of the glory of God. Rather, Jesus re-directs the conversation. He is interested in something else altogether. In fact, were Jesus to be in the car with us when we come to the intersection, I think he would say two things to us as our questions and judgments bubbled up.

I think he would say: “Don’t assume this person’s history and choices based on what your eyes see. Don’t look first for DEPRAVITY.”

And I think he would say: “Look at this person through God’s eyes; see the opportunity. Look first at DIGNITY.”

Why do I think that? It’s because of his response to the disciples. He said, “It was neither that this man sinned, nor his parents…” (that’s not the right question!) It was “so that the works of God might be displayed in him.”

Do you hear how radical a statement that is? Do you hear how counter that goes to our vision of others? What Jesus sees first in this person that others judged as depraved or sinful is someone in whom God will work and display His glory. That is the definition of dignity – that we are image-bearers of God and made for worship and giving glory to God.

With the disciples, we see a mess and God sees a canvas for a masterpiece.

With Friends Like That: the misguided counsel of Eliphaz (Job 4) 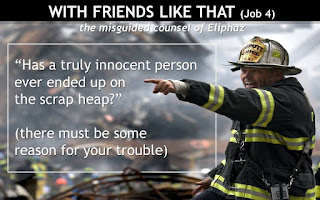 So this story reminded me of the story of Job. And I want to look at that because it clarifies the issues at hand even more starkly. Job was as close as it gets to a “good man.” And Job loses everything in increasingly dramatic and tragic degrees. He loses his wealth and property, he loses his family, and he loses his health. And yet he still refuses to curse or blame God.

And into that tragic situation his friends come to see him. And they offer counsel in a series of encounters. One friend, Eliphaz, offers the same kind of perspective as the disciples in John. Now everyone who knows Job knows he’s as good as a man can be. But Eliphaz offers what is a common human perspective. He’s very polite – “Would you mind if I said something to you?” He goes on to try to offer encouragement: “You’re in trouble – you’re hurting… Shouldn’t your devout life give you confidence now? Shouldn’t your exemplary life give you hope?” But then comes the same question at the heart of the disciples’ question: “Think! Has a truly innocent person ever ended up on the scrap heap? Do genuinely upright people ever lose out in the end? It’s my observation that those who plow evil and sow trouble reap evil and trouble.”

Two thoughts: First, Job IS on the scrap heap… what is he to make of this perspective. Is Eliphaz insisting that there must be some hidden sin, some reason for his trouble?

Secondly, if sin is not the reason, is Job’s only hope his “exemplary life”? In other words, does our fate and quality of life in this world lie squarely on our own deeds? Is that how this life works? The good prosper and the sinful suffer?

That puts a lot of pressure on us – and an infinite amount if we recognize that no one is perfectly good or righteous. Is it all just proportional then?

That the Works of God Might Be Displayed (John 9:3) 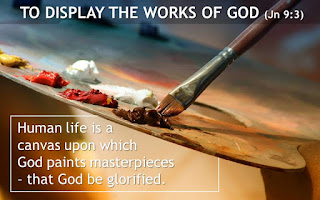 Again, Jesus heads in a different direction altogether. Please note again that I’m not saying that our choices don’t matter. Clearly a good choice tends to yield a good outcome more than a bad choice. And a bad choice tends to yield a poor outcome more than a good one. But these stories and questions are not focused on individual or even sequential choices of behavior, but on our spiritual status. That’s why I used the words DEPRAVITY and DIGNITY. Too often we make the leap from “that person may have made some poor choices” to “that is an unworthy person.”

Jesus responds to the disciples that the blind man is full of dignity, a human vessel for the works of God to be displayed. Human life is a canvas upon which God paints masterpieces – NOT that the human be the masterpiece, but that God be glorified. No one sees a beautiful painting and says, “What a MAGNIFICENT piece of canvas that is.” But one sees the beauty that the artist has created.

Jesus looks at the blind man and sees the opportunity for God’s glory to be manifest. And, because he is Jesus, he enacts that glory through healing the man. He is the “Light of the world” who is able to give sight to the blind. I realize that was Jesus and he could do that sort of thing. But he also speaks to the disciples of their part.

And certainly we would not look at any person, whether ‘successful’ in the eyes of the world or struggling to make ends meet at an intersection or even as we sometimes might thing, running a scam on us, and not believe that God could do something glorious in their life. And if we ever think God would not do something with a particular person, then we have really missed a lot of God’s story.

Jesus says, “We must work the works of Him who sent me.” That is, we are to participate in the work God is doing, not turn away from it or disregard it. So what does God do and what does God invite us to do?

Whose Job is It? 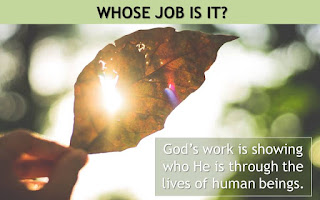 Said another way, “Whose job is it?” Or, what is God’s work and what are our works?

God’s work is showing who He is through the lives of human beings. That’s why God created us. And neither our sin nor the Fall removed that purpose. If anything, they gave God’s glory the opportunity to shine even more.

We need to know the limits of our works. They cannot save us. They cannot earn or lose God’s love. That’s what we mean by God’s love being unconditional. Our good work is to participate in God’s work – that is, in bringing glory to God.

So if God is interested in a prodigal son, a foreign woman with a scandalous past, a leader like Moses who fled his home because of a capital crime, a headstrong disciple like Peter, a man beaten and on the side of the road, perhaps we should figure out how to participate in God’s work.

There were multiple miracles going on that day with Jesus and the blind man. Not only did he heal the man, giving him sight and bringing glory to God; he also helped the disciples “see” the difference between their estimate of the man and God’s value and purpose for him.

I believe that’s what we are to take away from today’s story: the invitation to see others with God’s eyes… not as messes who somehow deserve whatever they are dealing with, but as men or women made in the image of God for the purpose of bearing God’s glory. If we can SEE in this way, it would dramatically change how we interact with others. It also might change the way we think of ourselves as well, for we are also image-bearers made to bear God’s glory.

May God give us eyes to see! Amen.

Previous
Patient, Not Slow
Next
Not By Bread Alone