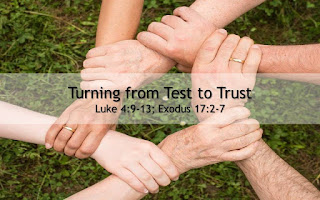 I remember standing there on the plank of wood facing away from my friends. They were in two lines behind me with their arms crisscrossed and holding on to form a human net. I was supposed to fall over backwards while keeping my eyes closed and they were going to catch me. I started to lean back and caught myself, looking around at them. Were they all paying attention? Were they all positioned the way they were supposed to be? My youth leader said I didn’t HAVE to do it, but that I would be glad if I did do it. I had to make a decision. I could either keep testing the situation, stopping myself and turning around to make sure they were ready; or I could fall, leaning back and losing control. But I couldn’t do both. Either I’d continue to test or I’d trust.

Today we are looking at a third time that Jesus was tempted by Satan during his forty days fasting and praying in the wilderness before beginning his public ministry. Two weeks ago we looked at the first temptation: to trust oneself over God’s Word and Truth. Last week we looked at the second temptation: to serve anything or anyone (including self) rather than God. Both times Jesus demonstrated the wisdom and blessing of listening and loving God, something we can do as well when faced with temptation. This third temptation is to test God rather than trust God. We’ll look at what it takes to turn from a testing mind and heart to a trusting mind and heart. 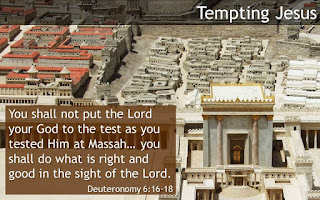 Satan challenged Jesus to throw himself off the top of the Temple in Jerusalem, saying, “If you are the Son of God, throw yourself down from here.” Now I realize this might be confusing because of its seeming similarity to the trust fall I’ve described. But this was not youth group in the 80s and the nature of the trust at stake was entirely different. In fact, Satan’s temptation reminds me much more of a more recent youth trend. I have seen teenagers (and perhaps even some less than mature adults) engage in a strange variation of the trust fall. In this more recent variation a single person falls backwards toward another person and shouts out “catch me.” It is demanding something that has not been offered; it is truly a ‘test’ and one that may or may not work out well for the one falling!

This is what Satan was asking Jesus to do! Satan was daring Jesus to demand God show His power. And for the first time Satan quoted scripture to Jesus, an interesting strategy and (as a side note) a caution that scripture can be misused out of context. Satan declared, “For it is written, ‘He will command His angels concerning you to guard you… on their hands they will bear you up, so that you will not strike your foot against a stone.’” Satan is quoting Psalm 91 but misuses it. That Psalm is an affirmation of God’s sheltering and helping hand for those who trust Him and are hard-pressed and in need. It is not a formula for hurling oneself into danger. To some extent, Psalm 91 is like the organized trust fall, telling the one about to fall to do so because “we’ve got you!” Satan’s twisted version of Psalm 91 is like the 11-year-old flinging himself backwards yelling “catch me.” It is no wonder that Jesus responds by saying, “It is said, ‘You shall not put the Lord your God to the test.’” The point of Psalm 91 is that God will provide for those who trust him; it is not a recipe or instruction for demanding holy intervention.

With his response, Jesus provides a little more information. He quotes again from Deuteronomy 6 (as he did with the second temptation). The rest of that passage reads as follows:

You shall not put the Lord your God to the test, as you tested Him at Massah… you shall do what is right and good in the sight of the Lord… (vv. 16-18)

Jesus is again affirming obedience to God’s will and Word. This has been his response to all three temptations, and it is our way out as well.  But let’s also track down the reference to Massah, which was a very well-known story to God’s people. Massah is where God’s people were said to have tested God. Let’s see what they did. 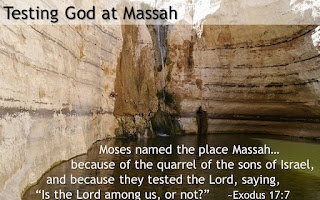 This story comes from Exodus 17. It is the first of two stories of water from the rock. In this story, the people are in great need, desperate for water, and they complain to Moses, who prays to the Lord. God provides water through the obedience and faithfulness of Moses. So in what way did the people test God?

I ask this question because it is not immediately clear what it means to test God. After all, there are examples of testing God in scripture: twice Gideon put out a fleece to verify what God was telling him to do. And here, is it not okay for the people to call out to God and ask for water, which they need to live?

The key to understanding what is meant here is in verse 7, in the explanation for naming the place Massah, which means quarrel:

[Moses] named the place Massah and Meribah because of the quarrel of the sons of Israel, and because they tested the Lord, saying, “Is the Lord among us, or not?”

It’s that last part: they tested the Lord by questioning whether the Lord was with them or not. They did not go to Moses and say, “Will you ask God to help us, to give us water?” They argued with Moses and demanded that he provide water. They no longer believed that God was with them. The difference between what the Israelites did at Massah and what Gideon did with the fleece is that Gideon was seeking God’s will and Word. The Israelites had given up on God and were beginning to turn on their leader, Moses.

This was the choice Satan put to Jesus. Throw yourself off the Temple and we’ll see if God is really among us or not. Certainly, God could have proven Himself that way, but Jesus took the route of Gideon, not the people at Massah. He trusted that the Lord was with him and he continued to seek, listen, and obey God’s will and Word rather than make his own way apart from God.

The Temptation to Test God 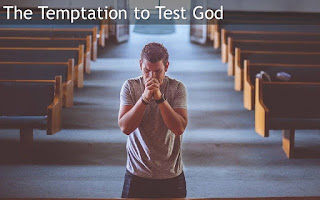 This is a very real temptation that we face. And the heart of it is not just doubting God or having periods of struggle with faith. That kind of struggle and doubt can find resolution. This particular temptation is to pin our faith on God’s coming through for us. It is the prayer that says, “This is what I need, and if God doesn’t answer this, then I’m giving up on God.” That’s the kind of temptation that can ruin us and take us down for a long time.

One of the reasons I hear often given by people who no longer attend church is something like this: “One time there was this horrible situation; I prayed to God to fix it and He didn’t, so I don’t believe in God anymore.” That’s where Satan longs to go with that temptation – to have people’s prayers not be about seeking God’s will, but about fulfilling our wishes and grading God on the results.

One of the defining moments for me personally was when I was twelve years old. My best friend’s three year old sister was rushed to the emergency room as a matter of life and death. I prayed hard all night while she was in the ER, as did many in my church. It would have been easy to pin my faith on God’s answer to those prayers, for it to become a matter of life and death to my faith. She did not die, but it didn’t turn out the way I had hoped either… trying to understand that was when my faith grew up.

Listening to God: the way to freedom 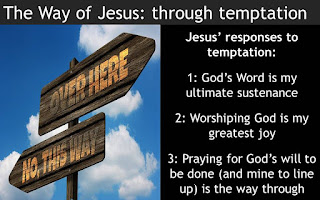 The Good News is that this is not about us being sinless like Jesus. Jesus did what we cannot do. The Good News is that he did, and he has made a way for us to be restored to a right and lasting relationship with God. Along the way, he has demonstrated the way to resist temptation without sinning, and has provided a way of hope and peace in this life.

Put your trust in Jesus Christ and follow diligently after him. He will show you the Father and give you what you need. Amen.

Previous
Turning from Idolatry to Worship
Next
Turn it Into Fruit!