Today we are starting a new series called “Come and See!” We will be working through the Gospel of John, about a chapter a week, between now and Thanksgiving. I won’t preach through whole chapters – if you are interested in that, check out Jim Hinton’s Sunday school class at 9:30 every Sunday morning. But I will pick one or two key verses or stories from each chapter to focus on. The purpose of the series is to invite a closer look at the person and teaching of Jesus and I believe it will be beneficial to long-time Christians as well as to those newer to faith or just checking it out. “Come and See” actually comes from today’s text in John chapter 1, where Philip, who has already met Jesus, invites Nathanael to come check him out. And that’s a model for what I hope this series can be. I hope it will offer you an opportunity to not only grow in faith, but also to invite friends who may be open to checking out who Jesus was and what he was all about. We’ll try to be extra user-friendly in the coming weeks and I hope you will think and pray about friends, neighbors, co-workers, or relatives you might invite to come worship with us.

Today we will look at the first chapter of John. It has a lot packed into one chapter, and serves as an introduction to the whole book of John. So I’ve picked three parts of it to focus on to try to give you an overview of the whole. In coming weeks we’ll focus in more on just one story or one main idea. But today there will be three: True God, True Human, and Worth Meeting. 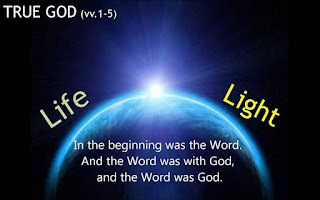 In verses 1-5, the Gospel of John opens up like the Bible itself opens up: “In the beginning…” It also begins with theology, mystery, and things beyond our full comprehension. But it sets the stage for what follows. We read about this “Word” that was not only present with God in the beginning of things, at Creation, but that somehow WAS God. As the intro unfolds we will realize that this “Word” is a name for Jesus, who is the subject of the book of John. But where we begin is that the Word is truly God and part of bringing life and the world we know into being. It is because of that creative role that John writes, “In Him was life.” (v.4) The Word – Jesus – is true God because He originates and manifests life itself.

We also read another name for the Word who is True God who is Jesus: He is “The Light.” I think John has to resort to all these names and metaphors because he is trying to use words and things we know something about in order to talk about something we don’t know about and can’t fully comprehend. In Confirmation I ask what light does. And we know the answer to that. It helps us see where we are going. We also use it as a metaphor for understanding, like a light bulb coming on in our mind. The subject of this book – the Word, true God, the Light – shines into our dark world. We may not fully comprehend the Light, but we can behold it and it can illumine our life, reveal dangers and pitfalls, and help us understand things. 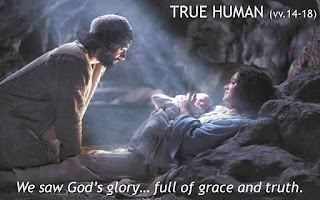 If that were all we got, we might be encouraged that God was interested in illuminating our lives, but we would not have any reason to expect a personal or direct encounter with the Creator God. But starting in verse 14, John tells us this amazing news: “the Word became flesh and dwelt among us.” The one who was and is True God, Creative power, Life and Light of the world, became human and made a home among us. This is Jesus, of course, and John makes this clear as he goes. But do you see the significance of this news? The True God because True Human, which allows us to experience and know the infinite God with our finite minds. And the rest of verse 14 makes spells out the implications for us. Because True God became True Human living among us, “We saw His glory, glory as of the only begotten from the Father, full of grace and truth.”

Because Jesus has entered this world as fully human but also fully God, he can show us God’s glory and speak God’s truth in a way that we can begin to comprehend. God did speak his Law to and through Moses (v.17), but in Jesus we can receive God’s grace and truth in a way we can experience and understand. John puts it most simply in verse 18: “No one has seen God” but Jesus “He has explained Him.” And that’s the setup for this account of Jesus that follows in the book of John. It is the story of the invisible and infinite God drawn near to us in the life and teaching of Jesus Christ. We can know and experience God because Jesus has made Him known. And that sets up the third portion of this chapter that I want to focus on. 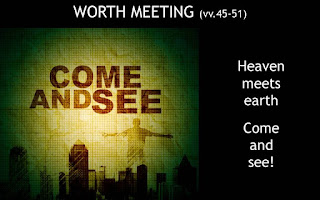 The third part of John chapter one that I want to look at is entirely different. We shift from theology lecture to narrative. At this point in the chapter (v.45), several folks have already checked Jesus out and decided to follow him as a Rabbi or teacher. Those included Andrew, Peter, and Philip. They had inquired after Jesus and he had responded, “Come and you will see.” Where we picked up in our reading today in verse 45, Philip goes and gets someone he knows name Nathanael. He tells Nathanael that they have found the one spoken of in the Law and the Prophets – in other words, the Messiah. Nathanael is doubtful, because Philip also mentions that he comes from Nazareth, which doesn’t have the good reputation of something like Jerusalem. But Philip utters those same words that Jesus had spoken to him earlier and which are the name of our series this Fall: “Come and see!” (v.46) And, in fact, Nathanael does come to check Jesus out and Jesus doesn’t disappoint. He seems to know all about Nathanael, who is impressed. But Jesus says, “Just you wait… you will see greater things than these.”

I want to say two things about this encounter. The first is to step back and ask if you see the significance of the encounter given what has come before. This is not just a random person meeting a great teacher. This is the practical demonstration of what it means that the eternal Word who is God has come to live and walk among us as a human being. This is Jesus who shows us the grace and truth of God in a way we can understand and experience. And Nathanael experienced that.

Secondly, I want to focus on the invitation to “Come and see.” Jesus spoke it to some of those first followers, who in turn spoke it to others. Prior to Jesus, there was no “come and see God.” But Jesus came to show us the grace and truth of God in words and actions we could take in. Not only is that the invitation he gives to you and me – to come and see; it is also the invitation we are privileged to give on his behalf. We don’t have to have talk people into faith or argue about their beliefs; our role is to invite people to consider Jesus – to hear his words and examine his life, death, and resurrection. HE is the one who “explains” God and helps people experience God’s grace and truth. We just make the introduction. But that’s not a ‘just’; it’s HUGE. It’s an invitation through Jesus to know the God of Creation and of all things.

So I hope you will take me up on inviting folks to church over the next few weeks. Actually the inviting to church isn’t as important as helping introduce people to Jesus. He is worth meeting! So any way you can do that is great. Maybe that’s bringing someone to youth group or women’s Bible study or men’s Wings Night. Or maybe it’s inviting them to read some of John and tell you what they think. Or maybe it’s sharing a bit of your own story and asking someone else about theirs. Bottom line: Jesus came to show us God, and he is faithful to do that! We have the opportunity to be a part of that; so let’s do it! Amen.