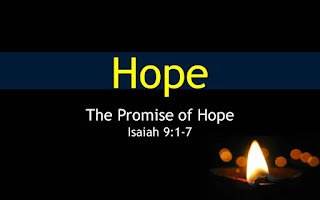 Today is the first Sunday of Advent, which marks a special season in the year of the Christian church. It is a time of waiting hopefully and faithfully on God. It is also special because the waiting has two layers. On one hand, we prepare to celebrate Christmas and the birth of Christ by putting ourselves in the place of those ancient people of God who were waiting for the coming of the Messiah. But on top of that hope and expectation, we remember the promises of scripture that Christ will come again gloriously at the end of things to make all things right.

For most of Advent this year we will be in Isaiah. It’s an appropriate book for Advent because it describes both the difficulty of life in this world set against the promises of and hope in a faithful God. Today we’ll look at the difficult context into which Isaiah spoke… one with more than a few parallels to our own context. We’ll look at an even more universal connection we have to his 8th century B.C. audience. And finally we’ll look at what God has done to give us hope. 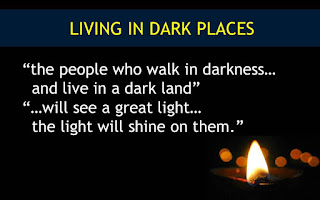 Isaiah 9 speaks of “The people who walk in darkness… and those who live in a dark land…” (v. 2) In this part of Isaiah the prophet is writing to people of Israel who are enduring invasions at the hands of the Assyrian Empire. You get some of the vivid imagery of what that entails in verse 5 with “the booted warrior in the battle tumult, and cloak[s] rolled in blood.” In Isaiah’s immediate future, his people would be defeated and carried off into exile. It was a dark time, indeed.

That’s why God’s promise through Isaiah rings with such strength and hope… it’s not another silver bow on a shiny Christmas present, it’s the news that this dark place that is the world they lived in was not all there was. There WAS hope to be found, even beyond the seemingly powerful and threatening powers of this world: those in the darkness “will see a great light… the light will shine on them.” (v. 2)

Isn’t that a timely word for us as well? Have you not had moments of wondering what is happening to our world and the world in which our children will grow up, with news of terrorists, shootings, genocide, and more? Is it not REAL Good News that God is more than a happy hymn in a candle-lit church service? Rather, God is present and on the move in war-torn places, in the midst of injustice and slavery, in the schools when students are hiding under desks for fear of being the next statistic, and in the other dark places of this world. That is the HOPE toward which Advent points us, that Immanuel – God is with us – is not just sweetness and light, but life-saving, life-freeing, evil-destroying, and dark-dispersing light in the dark places of this world. 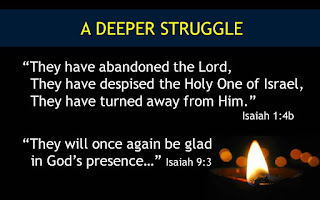 While Israel’s immediate struggle in Isaiah’s day was with a foreign military power, their deeper struggle was with God, Himself. God’s chosen people had wandered from Him in word and deed. If you look at the very beginning of Isaiah you read God’s case against Israel: “They have abandoned the Lord, they have despised the Holy One of Israel, they have turned away from Him.” (1:4b) Indeed, their vulnerability to the surrounding countries and their eventual exile were explained as the result of and judgment for their abandonment of God.

And yet… God did not abandon them. God’s judgment and discipline may have felt like abandonment; every child who has been sent to their room or disciplined has wondered at one time or another if their parent has turned against them. But the discipline is meant to restore what has been broken and God’s desire for His people is clear: that they will once again be glad in God’s presence as with the gladness of harvest. (9:3)

And if we can recognize our own story in theirs, we will see that this whole passage is God’s Word to us this morning. We are also people who walk in a dark world. And that’s not just a description of the context of this world, but the cause behind it. Ever since the original sin, the ‘lights’ have gone off. It is only the light of God’s Word and face that shines any light into our world. That’s the story of the Bible – that the human race lives in darkness. We are not intrinsically good; we are not morally innocent; we are born into darkness, separated from God.

And even more than that, each of us replicates our first parents’ original sin as we disobey and rebel against God. Who me? Rebellion? But who among us has not lied, cheated, stolen, or even killed in some direct or indirect way? Even more significantly, we frequently break the first several of the Ten Commandments when we serve ourselves over serving God. While it may sound over-dramatic, it is not a stretch to say that because of sin humanity is at war with God. We may not realize our own greatest need, but it is laid out before us in this Bible passage in the life of Israel. We live in darkness and are at war with God. 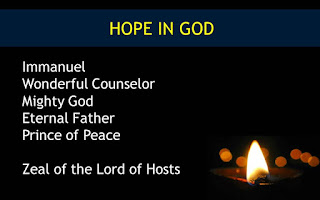 The great hope held out in this passage is not that we will somehow stumble into the light or negotiate our way into some kind of peace, but that God will save or rescue us. God will give us what we need.

For one thing, God is powerful. The ‘child’ identified in verse 6 is the same Immanuel from an earlier chapter. Immanuel means “God with us.” Thus, it is God being described with these names. God is “Wonderful Counselor” – He is on our side, working on our behalf. God is “Mighty God” – strong and powerful, able to accomplish His will perfectly. God is “Eternal Father” – forever and infinite, yet personal and loving as a father. And God is “Prince of Peace” – the personal and present ruling One who brings peace at last to a people fundamentally at war with Him.

I have compared God’s work to the great main theme of a master work of music. Or like the theme to Star Wars or Indiana Jones, you know it when you hear it. We’ll know God’s great conclusion and redemption of all things when it happens. But in the meantime we experience glimpses and glimmers of that final grand theme. Smaller motifs signal what is to come: justice rendered in the life of a victim; forgiveness offered to someone who has done us wrong. We are not doomed to live in darkness until the end. Rather, God’s light has shined through Jesus Christ; and it continues to shine until the final rendering of peace.

If anyone can and will accomplish a peace that will last, it will be this great, strong, and eternal God who is on our side, who calls us family, and who has promised to come save us. This promise is ancient – made by God even in the moments after Adam and Eve disobeyed for the first time. God continued to promise salvation, to Abraham and later to King David. It is this ancient promise that is held out as hope in this passage in Isaiah, that a child will be born to “sit on the throne of David” and restore peace.

That God can and will bring this peace is affirmed in verse 8, “The zeal of the Lord of hosts will accomplish this.” Zeal is what I would call a “first commandment word.” The first commandment says, “Thou shalt have no other gods before me” (Exodus 20:3). That is God’s zeal speaking. There is only God; there is no other power, no other force, no other ruler, no other deity; there is God alone, worthy of all worship, glory, and honor.

Who could do all that is promised here? God alone! 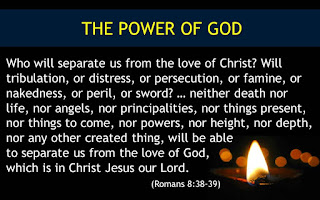 The Lord of Hosts” is an ancient name for God. It signifies not only the power of God in and of Himself; it also signifies that all the company of Heaven and earth stand behind God in support. All the angels, all of creation, all that is… serve the Lord. Nothing can stand against the will of God. That is the basis for the encouraging words of Romans 8:

Who will separate us from the love of Christ? Will tribulation, or distress, or persecution, or famine, or nakedness, or peril, or sword? … neither death nor life, nor angels, nor principalities, nor things present, nor things to come, nor powers, nor height, nor depth, nor any other created thing, will be able to separate us from the love of God, which is in Christ Jesus our Lord. (vv. 38-39)

… neither debt, nor doubt, nor cancer, nor age, nor weakness, nor frailty, nor any other thing you can name…

What can hinder or thwart the promised peace of God? Nothing!

Previous
Thank You, God
Next
The Power of the Blues