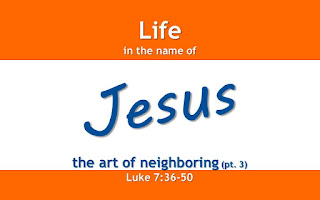 In the past two weeks we’ve considered what it means to be a good neighbor and what gets in our way. Jesus teaches that a good neighbor is one who shows mercy. And he teaches us to put the other person first, which is a form of compassion. Today we will look at a third lesson on neighboring, demonstrated to us by an unwelcome guest at a dinner party. We are taking this look at being a good neighbor as part of our focus on living life in the name of Jesus, or “holding fast to Jesus’ name.” 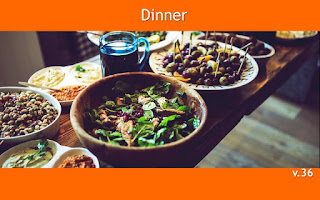 And you can bet that Simon the Pharisee invited all the “right” people to this dinner. We don’t really know if the point was to test Jesus or find out more, though we will have a few more clues about that later in the text.

But picture this if you will: it’s a church dinner for church people, like the kind of thing we might do on a Wednesday night. I kind of know who to expect, who will show up. And if I’ve invited a guest, I kind of hope we make a good impression. Maybe we’ll have some of that mac and cheese we had this past Wednesday. That would make a great impression! 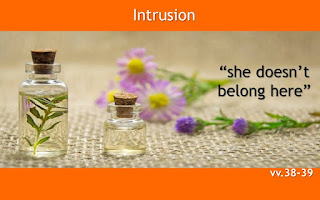 And then, someone appeared at Simon’s dinner party who was not expected, not invited, and definitely not welcome. It was that woman that everyone knew about. She was known for her bad behavior. She was frequently part of the rumor mill.

Now you may be wondering how that worked – did she just break into his house? Think of this more like a lawn party. There were definite guests who were eating, but it was kind of open to the neighbors, who might stop in and just see what a lovely table Simon had set and who all he had over for dinner. So it was easy enough for the woman to get near Jesus.

As bad as it was that she came, it just got worse. She started touching Jesus’ feet. She poured out perfume and wiped his feet with her tears and hair.

Now you and I may be kind of freaked out by the tears and hair part, but really for them the more unusual part was the perfume and touching someone presumed to be a Rabbi…. and Jesus let it happen. A Rabbi would not have allowed the contact with any woman, but particularly not this woman.

And Simon and the other Pharisees were shocked. Interestingly – and this is the first place I wonder about their motives – they didn’t ask the woman to leave, but they questioned Jesus’ status as a prophet. Surely he should know, they say, what kind of woman she is.

I come back to modern day church. I know we talk an awful lot about reaching out and being neighborly and welcoming folks. But I can feel the tension in this story. I can imagine if someone came to worship or dinner church or the BBQ who was noticeably out of place. Now it’s one thing if someone is disruptive or actively threatening, but I just mean someone who doesn’t appear…. churchy. I bet we’d be squirming. We might not turn on Jesus like the Pharisees did, but we sure would be asking the question, “Why is that person here?” And maybe even a “they don’t belong here.” 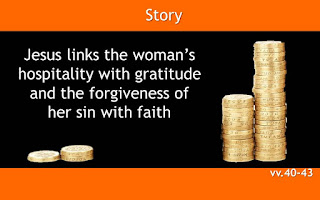 “A moneylender had two debtors: one owed almost two years’s wages; the other almost two month’s wages. When they were unable to repay, he graciously forgave them both. So which of them will love him more?” (vv.41-42)

Simon responded… “I suppose the one whom he forgave more.”  [I love the inclusion of the word ‘suppose’ in there… clearly Simon knew he was playing into Jesus’ hands.]  And Jesus said, “Correct!”

But then Jesus turned toward the woman [also fascinating the physical gestures here] and said to Simon, “Do you see this woman? I entered your house; you gave me no water for my feet, but she has wet my feet with her tears and wiped them with her hair. You gave me no (greeting) kiss; but she, since the time I came in, has not ceased to kiss my feet. You did not anoint my head with oil, but she anointed my feet with perfume.” (vv.44-46)

Simon had invited Jesus to be his guest, but had not treated him as one. In their culture, this omission of basic hospitality was tantamount to a sin. It was certainly shameful. And the so-called ‘sinner’ had treated Jesus with respect, welcome, and honor. She demonstrated hospitality and Jesus linked it to her gratitude (and Simon’s lack of hospitality with lack of gratitude). And with that link to debts and forgiveness, he tells the woman, “Your sins have been forgiven” (v.48) and he links that with her faith (v.49). And all that, of course, set off the religious folks even more. 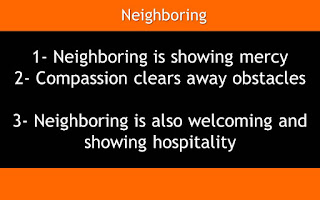 When we looked at the story of the Good Samaritan two weeks ago I noted that the Samaritan was put in the interesting role of showing the religious scribe the true meaning of the Law. But that was an imaginary story, a parable Jesus told. In today’s text a real live outcast and sinner is in the role of teaching religious people what true hospitality and gratitude look like.

And this opens up a third application about neighboring for us. We’ve looked at neighboring as showing mercy. We’ve looked at what stands in the way and the importance of compassion in clearing away obstacles. And today we are reminded that sometimes the best thing we can do is welcome someone. We tend to think of being a good neighbor as going and doing, but it is also welcoming and showing hospitality. It is not only “hey, can I help you with that” but also “I’m glad you are here with me.”

These are not complicated lessons. In addition to Jesus, a beloved Presbyterian minister named Fred Rogers also taught these simple lessons to several generations of children. I believe Mr. Rogers did so because he believed being a good neighbor was the essence of the Gospel.

It is more than being decent to the person in the house or apartment next to you, though certainly it is at least that. But Jesus (and Mr. Rogers) would remind us that neighbors are everyone we have the opportunity to come in contact with. And holding fast to Jesus’ name means making the most of those opportunities to show mercy, have compassion, and provide a place of belonging and community. Amen.

Previous
The Art of Neighboring 2
Next
Reflections and Glimpses