Who is my neighbor? That’s a question asked to Jesus in the text we looked at last week and it’s one I want to keep before us today even though it isn’t asked explicitly in today’s text. We are continuing in a series called “Life in Jesus’ name” as well as looking today at being a good neighbor along with over 100 other churches in Charlotte. 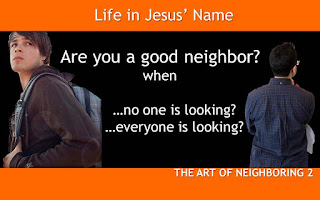 Today I specifically want to focus on two aspects of being a good neighbor. And in good Jesus fashion, I’ll frame them as two questions:

Are you a good neighbor when no one is looking?

Are you a good neighbor when everyone is looking?

In today’s text Jesus encounters two women and offers them healing and mercy in two different ways and contexts, but with remarkable consistency. He is ready to love, ready to heal, and full of compassion.

Our text opens focused on the second of the two stories. As Jesus returns to Capernaum from being in foreign country a synagogue official named Jairus falls at his feet and implores him to come heal his twelve year old daughter who is near death. But on the way, something happens and we are swept into another story. 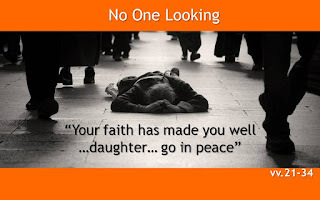 As Jesus is heading to the house of Jairus to see the young girl on the brink of death, someone touches him and he stops. Now all kinds of people are touching him, but this someone reached out in faith and he felt his spiritual power heal her. So much here to think about!

We get the backstory: a woman had been suffering from a flow of blood for twelve years and had not been able to find any remedy for it. In fact, not only had she consulted doctors, she had spent all that she had and the condition had only grown worse. Because of the nature of her condition it would have not only been physically debilitating, but also disqualified her from marriage and religious life in general. She would have been as much outcast and “unclean” as the lepers we talked about a few weeks ago.

And here’s the fascinating and somewhat unique part about her story. While others waited for or called out to Jesus for healing, she kind of snuck up on him and just touched his robes believing that she would be healed. Jesus realized what happened, not because he felt the touch, but because he felt the flow of power. I have no idea what that means, except that Jesus was aware of his spiritual power and knew what happened as soon as it happened. I also know – because Jesus says so – that the woman’s faith played some part in her healing.

But Jesus wasn’t passive in all this. He wasn’t some sort of spiritual battery where touching him zapped anyone who came in contact with him. In fact, in the next chapter he returns to his hometown of Nazareth and because there was so little faith, he did not do many miracles.

But here’s the point I want to focus on this morning. It’s the first question: are you a good neighbor when no one is looking?

No one saw what happened. In fact, even after Jesus stopped and said what happened, the disciples were confused because so many people were crowding around Jesus. Jesus had the opportunity to keep moving – he was, after all, on the way to save a young girl’s life. But Jesus chose to stop and get involved. He offered her so much more than physical healing. By calling out to her and naming her ‘daughter’ he acknowledges her publicly and restores her status in the family of God. When he says, “go in peace” (shalom) and says “be healed of your affliction” he pronounces her clean and restored to society and God. He offers context to her faith and his power and gives her a new name and a new place in the community. Interestingly, he brings what could have been a hidden and private moment out into the public. In doing so he not only heals her; he restores her. And he didn’t have to do any of that. No one even realized who she was or what had happened. And he was on his way to save a life.

What kind of neighbors are we when the act – whether mercy, kindness, acknowledgment, or community – won’t be seen or doesn’t have to be recognized. Maybe the neighbors mailbox didn’t close and mail has fallen out; do you put it back if no one sees? Or what if someone is talking bad about a neighbor, or a co-worker, or another student, and they aren’t there. Will you stand apart? or even bolder, stand up for them? Do you pray for your neighbors and their needs even when they don’t know you are doing it? Being a good neighbor isn’t about been seen; it begins in our hearts and it is part of holding fast to Jesus’ name. Are you a good neighbor when no one is looking? 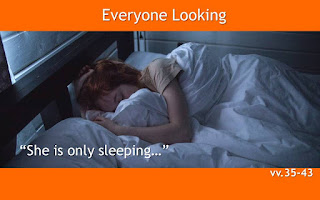 As this scene is wrapping up someone comes from the house of Jairus to report that his daughter has died. In fact, they add, “Why trouble the teacher any longer?” The woman in the first story had been afraid to touch Jesus, but her fear had led to faith. Similarly, Jesus challenges Jairus not to fear, but to believe.

Now there was a commotion at the house. It was customary to have people publicly grieving at a death and this was going on when Jesus arrived. This made what followed a very public event, at least at first. So this is why I raise the second question: Are you a good neighbor when everyone is looking?

So Jesus speaks to the crowd and asks why they are making such a commotion, for “the child has not died, but is asleep.” (v.39) And they ridiculed him for that. He was about to do something profoundly generous and he faced ridicule for it. And interestingly, for this public encounter he cleared the room. Where he could have put on a show, a spectacle, he asked for privacy. He was restoring a young girl to life and to her family, not making her the centerpiece of his miracle show.

What kind of neighbors are we when everyone is looking? Do we put on a show and miss the opportunity for authentic and real connection? Do we come across as fake because we are nice when people are looking, but noticeably less so if they are not? In both cases, Jesus put the others’ needs first. The first woman needed public restoration. The girl needed some privacy as she was restored to her family.

So, let me offer some challenges. Clearly, we have different skills than Jesus, and from each other. We aren’t going to face the decision to heal someone on the way to raising someone from the dead. But we do have the opportunity – probably more than we realize – to be neighbors, to show mercy, to demonstrate compassion.

If we are following Jesus’ example – holding fast to his name – that means we will be neighbors for the sake of the other person. We’ll work hard to put ourselves in their shoes, figure out what they need, whether they need to be included into a community or offered some personal space and shelter.

Last week we asked who our neighbors are and saw that neighbors could be people like us or people different from us. Neighbors are anyone God puts in our path AND anyone to whom God sends us. In fact, we realized their neighbors are everyone and the more telling part of being a neighbor is HOW WE ACT – how we live out our beliefs – with other people. So Jesus highlighted showing mercy. 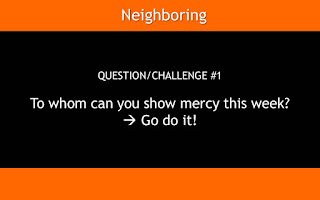 QUESTION #1: To whom can you show mercy this week?

Today we considered the motivation of being a good neighbor. Does it matter if people are looking, or not? Jesus showed that his healing wasn’t about him, but about the person whom he healed. Fear needs not bind us when faith can set us free. 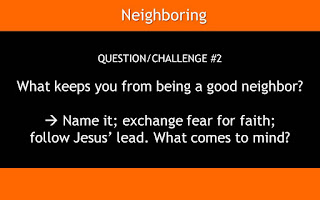 QUESTION #2: What holds you back from being a good neighbor?

I’d love to hear what God does with you this week. Amen.