I have to admit: this text is hard, specifically the verse about killing the children of Jezebel. But if I avoided the hard verses or verses we didn’t understand, I wouldn’t really be doing you any favors. So we’ll try to work through that together.

We are in the fourth letter in Revelation, the fourth letter to us. I realize we don’t match up point for point with all the churches and all the issues, but I do believe that since people make up the church, we can learn something from each of these letters. 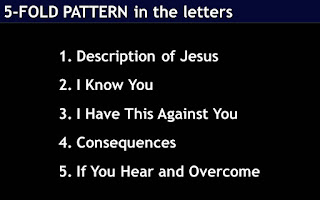 Today we’ll rely again on the basic structure I identified in the first week of our series. And out of that we will see today’s primary theme of STUBBORNNESS, and how God deals with it.

I’ll also note that the first four churches represent a kind of range. One was high in knowledge, low in love and action. One suffered persecution and was simply encouraged to persevere. One was a mixed bag of faithfulness in persecution and over-participation in the excesses of the surrounding culture. Today, with Thyatira, we find a church that swings even further toward love and enculturation, and away from truth and purity. It is a dangerous error, especially when mixed with a refusal to repent, change, and grow. 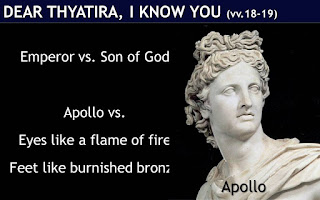 As with the other letters, this one opens with Jesus identifying himself as the author, with imagery pertinent to the situation at hand. In this case, he says he is “the Son of God, who has eyes like a flame of fire, and feet like burnished bronze.”

Thyatira featured worship of Apollo, Artemis, and the Roman Emperor, who often referred to himself as the “son of god.” The city was also a military garrison and home to a bronze-worker’s guild, though it was better known for its trade in cloth and dyed fabric. Jesus’ identification as “the Son of God” and his use of imagery here and throughout this letter may be both to “speak the language” and challenge the local customs of those receiving the letter in Thyatira.

I the “I know you” section emphasizes the loving deeds, which “of late are greater than at first.” In contrast to Ephesus, who had the corner on the truth but had lost their “first love,” this church was long-suited in love and action. It may be what contributed to a tolerance of dangerous teaching, as if they were too loving to define and cling to truth vs. falsehood. Again, kind of the opposite of Ephesus, demonstrating that God’s desire was a healthy balance of truth and love rather than one extreme or the other. It is also commendable that they were GROWING in love and deeds. But a danger had arisen within the church. 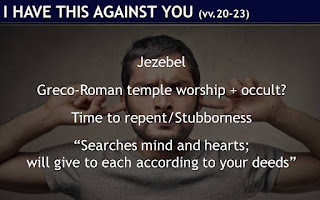 And now we get to Jezebel. She was apparently a real woman in the church, either taking or being given the name of an infamous character in the Old Testament. Both Jezebels led the people of God astray with similar invitations to partake in the temptations of the surrounding culture. In the time this letter was written, and as we talked about last week, temples to Greco-Roman gods like Apollo or Artemis were not just places to pray or meditate. They were places where food, sex, and magic were all believed to be inter-twined. For the local Christians to take part in these things were the antithesis of everything Jesus and the scriptures taught about godly behavior. It wasn’t that food or sex or worship were bad, but that God had given good and safe boundaries for all of those and the local religion crossed all those lines and then some.

And here’s the kicker: Jezebel was part of the church in Thyatira. She claimed to be a prophetess and directed church members to take part in the practices of the local religions. It also appears that she promoted the occult and learning “the deep things of Satan” (her terminology!). So, this is no casual or ordinary vice or sin.

The specific thing Jesus has against the church in Thyatira is that they tolerated Jezebel’s teaching. They allowed it to go on and on and even got drawn into it. And here’s where STUBBORNESS fits in. God gave her time to repent, but she continued, drawing more and more of the church into her destructive behavior.

And here’s where things can get confusing. Though she is a specific and real person, much of what is then said about her becomes symbolic rather than literal. Those who “commit adultery with her” are not primarily doing so literally (though they may be), but committing spiritual adultery against the Lord by worshiping, following, and serving other gods. It’s the language of the Ten Commandments and gets at the very core of what sin against God looks like. Likewise, the children named in verse 23 are not literal children, but all the spiritual children borne of her false teaching and sin against God.

It all sounds incredibly harsh and unloving to our modern ears, but it is the essential opposite of trusting in and following God. It is open rebellion against God, who not only would forgive and welcome her and her followers home, but had apparently invited and given time to repent and do so. There is a part of us that just wants everyone to be saved and reconciled to God – and in fact, God wants that as well! But in the end, in the final reckoning, those who insist on rejecting God will die. And it would hollow out God’s love, justice, holiness, grace, and salvation to expect a loophole or end-run around God’s invitation to life. Nonetheless, it is and remains a hard thing to come to terms with.

At the end of this “I have this against you” section Jesus provides the reason for the judgment. He says it is so all the churches will know him as the one who “searches the mind and hearts and will give to each one according to your deeds.” God will not be mocked or fooled; Jezebel claimed to hold the secrets to knowing God, but God knew her inside and out.

Now all this seems to be in conflict with what we said last week about our sin not determining our salvation, but Jesus’ faithfulness doing so. Last week we talked about the dangers and unhealthy of clinging to heavy burdens and getting tripped up by entangling sin.

I would say these things are in healthy tension with each other. Indeed, there is no burden or sin that can keep us from God if we trust in Him. God’s mercy, forgiveness, and grace are wider than the sea and certainly bigger than our worst. Yet, we also read of Jezebel, who stubbornly refused to repent, refused God’s call to turnaround, and boldly rejected God and the truth about God. I fully believe God would forgive and welcome her at any point, but God will also not force believe and repentance on her. So, in the end, we also see the consequence of refusal to trust God. And it is spiritual judgment and death. 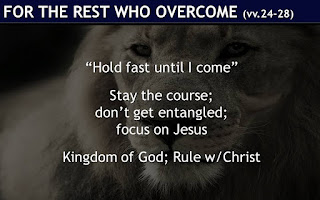 There are also those in the church in Thyatira who do NOT follow Jezebel’s teaching. Jesus exhorts them to “hold fast until I come.” Stay the course; don’t get entangled; keep your eyes on Jesus.

Those who do this “overcome” and will share in the rule of Christ. This seems to tie back in to the imagery with which Jesus introduced himself and in contradiction with the “son of God” who ruled in Rome (i.e. the emperor). In his earthly ministry Jesus did not fight against the power of Rome, but for eternity the Kingdom of God would be the ultimate and eternal power, with Jesus ruling with justice, power, and love.

Said another way, Jesus is urging the Christians in Thyatira to put their hope in God’s rule, not Roman rule, to trust in God’s gracious blessing not the favor of the gods that could be traded in the market for money, food, or sex. On one hand it sounds so ancient, barbaric, and foreign. On the other hand, it’s frighteningly contemporary!

APPLICATION: Who Has an Ear? 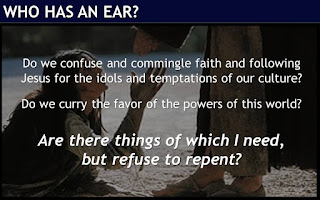 So do we “have an ear to hear what Jesus is saying to the church… saying to us?” Do we confuse and commingle our faith and following Jesus for the idols and temptations of our culture? Are there powers in this world that we serve in order to curry their favor, though it may put us at odds with obeying God and following Christ?

I’m not sure what is going through your head, but it’s an emphatic and certain YES to me. One frightening large-scale example is when the church of any stripe sells its votes to a political party rather than its first allegiance being to God. And that happens on the left and the right.

But it’s also personal. I may be no Jezebel, but I can cling to ungodly thoughts and habits with a frightening amount of stubbornness. And ultimately, while today’s text does raise questions about salvation and eternity and who will be saved, I don’t want to miss the more immediate and pressing question: Are there things of which I need, but refuse to repent?

The letter to Thyatira serves as a sobering warning that, though God is patient and loving, we cannot rebel indefinitely. And as a side note, refusal to repent becomes easier the longer we do it, until we hardly think about it anymore. This letter is a good wake-up call… Will we hear it? Will we answer it? With God’s help, we can!

Come, let us worship and bow down
Let us kneel before the Lord our Maker.
For He is our God
And we are the people of His pasture
And the sheep of His hand.
Today, if you would hear His voice,
Do not harden your hearts…
~Psalm 95:6-9

Previous
What is the Bible?
Next
Anchors
August 14 Prayers of and for the…