“Hosanna! Blessed is he who comes in the name of the Lord!”

It’s Palm Sunday, a day when we remember and even re-enact some of that procession on the Sunday of Jesus’ last week. He entered Jerusalem to shouts of Hosanna and a crowd. Only four days later he would be arrested in the middle of the night and a different crowd in the same city would shout, “crucify him!” The next day, Friday, he would be crucified, and then would die that same day. Something doesn’t match up between Palm Sunday and what we now call Good Friday.

I want to look at several texts today on this Palm Sunday and divide the sermon and these events into three parts: EXPECTATION, REALITY, and EXAMPLE. 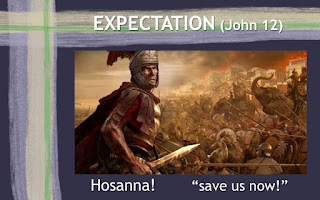 I grew up thinking “Hosanna” was kind of like “Hallelujah” – a shout of praise when you really got worked up about God. While the preacher probably did talk about what was really going on, I didn’t listen or it didn’t sink in until years later what the crowd was shouting and what was going on. I talk about it with some frequency here, but if you have missed it or if you are newer here, let me go back over a little of that.

The Jewish people at that time, two thousand years ago, were part of the Roman Empire. A thousand years before that they had been their own modestly successful kingdom, with popular Kings like David and Solomon. But they were later conquered and exiled; and when they did return to their former kingdom, they were subjects of successive empires, with Rome being the biggest and most recent. That meant in Jerusalem and the surrounding towns they had to follow Roman laws and pay Roman taxes. There was a Roman governor with more power than the local Jewish king. There were Roman soldiers in the streets and no Jewish soldiers or army.

For years hope had been growing. That hope was in the sacred writings of the Hebrew scriptures and in the sermons of the Hebrew prophets. God was going to send a Deliverer just as He had once sent Moses to deliver the people from slavery in Egypt. God was going to send a King from the line of David, but even greater than that great king. And by the time the Romans were taxing and ruling first century Judea, the hope in the Messiah was great. He would save the people from Roman occupation and would restore the kingdom of Israel to glories even greater than when David was king.

“Hosanna” was one of the songs of Israel, sung every year at Passover in hope of the Lord’s salvation and blessing. It’s a Hebrew word that means “Save us, now!” That is what the crowd was shouting that Sunday when rode into Jerusalem on a donkey just like one of the prophets had described. And they didn’t just shout “Save us, now” but the next part of Psalm 118 as well: “Blessed is the one who comes in the name of the Lord!” They were directing that at Jesus – both the plea that God would save them and identifying him as the blessed one God had sent. That they add on “even the King of Israel” – words not in Psalm 118 – demonstrates their hope and expectation for that blessed one from God to BE a great king like David.

Though Jesus turned away on several occasions from embracing that understanding of himself as earthly Messiah-King, it was what the religious authorities used to get him arrested, tried, and crucified by the Romans (who were the ones who enacted crucifixion for treasonous crimes against the empire). Even after his resurrection some of the disciples still had it wrong and would ask him, “Ok, NOW are you going to restore the kingdom of Israel?” (Acts 1:6) 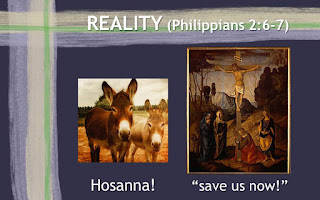 I’m going to turn to Philippians 2, but start with verses 6-7. Those verses don’t describe in detail what Jesus was doing; next week we’ll see that detail in verse 8: “He humbled himself by becoming obedient to the point of… death on a cross.” But even verses 6-7 make it clear what Jesus was NOT doing. Those verses declare that Jesus existed in the form of God – he was (and is) fully Divine. That’s all the power and all the authority. But he did not cling to that or grasp on to that, but emptied himself of that in order to take on humanity. As verse 7 describes it, he took “the form of a bond-servant, being made in the likeness of a human being.” So Jesus became fully human.

And we have already been reading of his character in the preceding verses in Philippians. He did not come to wield power – divine or earthly – but to serve God and others. That’s the mission he was on and the example he set for his followers. And that is born out in the Gospel accounts of Holy Week. Even though crowds of people – including some of his own disciples – wanted him to seize earthly power, he did not grasp after it. And let’s be clear: it was offered to him. It was offered to him by Satan in the temptations at the beginning of his adult ministry. It was offered to him by the crowds at the “Feeding of the 5000,” where we read “they were wanting to make him king by force.” (John 6:15). But he slipped away. Later at his trial, when Pilate asks him if he is King of the Jews, Jesus answers, “My kingdom is not of this world.” (John 18:36) He goes on to say that if it were his followers would have fought against his arrest; but he again says that his kingdom is not an earthly one.

And the events of crucifixion and resurrection go on to bear out what Paul writes in Philippians. Jesus did not seek or grasp after earthly power any more than he did heavenly power and deity. He emptied himself in obedience to God the Father and out of love for the world God loved. So, the words shouted that Palm Sunday were true – he was the blessed one who came in the name of the Lord to save. It just was a salvation and blessing different from the one the people thought they needed. 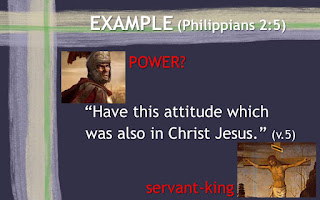 And then to back up one more verse in Philippians 2, Paul writes in verse 5 that we are to “have this attitude in yourselves which was also in Christ Jesus.” That suggests to me that there are two takeaways from Palm Sunday in relation to who Jesus actually was and what he actually did.

The first has to do with salvation. Or maybe you want to use the word hope or expectation or prayer or longing. But if we are going to join the human race in crying out “Save us, now!” We need to be clear about what God is offering. Or let me frame it another way. When you think about your own needs or the needs in our community, country, or world, what is it that you think the world needs the most? I know the pageant answer is “world peace” but how would that come? Really, take a moment and think about how you would answer that if you weren’t sitting in church expecting the answer to be “Jesus.”

At heart the Palm Sunday crowd was looking for a political answer to their pressing needs. They didn’t like the Roman emperor and all that came with that. The Jewish King they had – Herod – was pretty bad. So… let’s get a new King with more power. And certainly some earthly leaders are better than others. But that’s not why Jesus came. He came to give up power and serve others – in everyday ways and in the ultimate sense. That’s God’s salvation.

So indeed, we should shout “Hosanna” – we should cry out to God for help and salvation. But let’s make sure we are paying attention to what God is offering.

As a second takeaway, don’t miss verse five. Not only do we need to see Jesus for who he actually is and what he actually did; but we are challenged to be like him. Paul challenges us to align our lives with his in Philippians 2. And Jesus gives it as his last command on Thursday night of this Holy Week. That’s what “Maundy Thursday” means – the Thursday mandate or commandment. We’ll look at that this Thursday night at the service. What did Jesus do? He, their Lord and Teacher, took off his robe, put on a towel, and washed the feet of his followers. He served them. Then he told them to go and do the same. We are not only to pay attention and understand the help God is offering; we are to live out the same kind of help in the world around us.

Hosanna, indeed. It’s a short word that requires us to look around with spiritual insight and honesty and it invites us to the very thing we have been talking about for weeks: fixing our eyes on Jesus Christ and living lives in keeping with his.