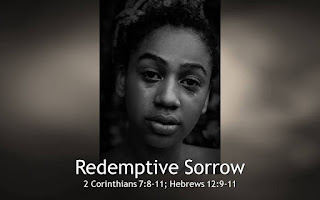 Picture this: a parent slowly and deliberately walking up the stairs to their child’s room, not to be dramatic but because what is about to unfold will be hard and uncomfortable. But it’s necessary; the child’s choices are harmful to them and to others. The parent doesn’t want to rob them of joy, but to lead them back to safety and a place of thriving and health. I’m not being specific because my hope is that you will plug in the details for yourself. Maybe you are the parent; maybe you are the child. Maybe you remember being the child years ago. 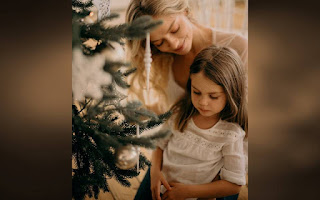 And what comes next? What happens after the parent struggles to speak the difficult words of truth and love? Does the child cheer and say, “What a great thing you’ve said! Thank you for loving me so well!” No, I’m not sure it ever goes down like that. Often there are tears or anger or resistance. But our hope is that words spoken truly and out of love will get through, will sink in, will lay hold of the heart of the child and invite them to a change, a new perspective, a better path. When that happens – and it doesn’t always happen – it’s full of grace and full of God. When it happens that initial emotion and resistance can turn inward and soften the heart and lead to a change, to repentance. There’s no easy or magical way to make that happen, because two people are involved. But when it does happen I am thankful and usually challenged and changed myself through it.

That scenario is described in our texts today. In 2 Corinthians, Paul describes a similar confrontation, but not between parent and child, but between pastor and congregation. In our call to worship in Proverbs and in the Hebrews text, God’s loving truth and our response to it are compared to that encounter between parent and child. So I’d like to look at that situation in Corinthians and consider how God might use loving truth to lead us to life and health. Take note that our initial response may be that of the ‘child’ – a surge of emotion or walls of resistance. But cling to the fact that God loves us and wants the best for us! 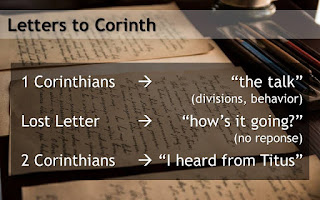 I’ll be brief about the situation in 2 Corinthians 7, partly because verse 8 references a letter to Corinth that has been lost to us. But the basic situation is that in the first letter Paul wrote to the Christians in Corinth (1 Corinthians), he had “the talk”… that is the one where the parent comes up to confront the bad behavior. In the case of the Corinthians there were divisions, immoral behavior, and more ; it was bad and Paul was direct. Apparently – and I think you can imagine this – such a letter didn’t go over well. If we get defensive when challenged about one behavior, just imagine a whole church community being confronted about multiple, major behavioral stuff.

The best we can tell, this missing letter was checking in to ask, “How are things going after the last letter (i.e. 1 Corinthians)?” But Paul heard nothing in response. Paul writes early in 2 Corinthians that he was intending to come back in person (1:15), but then decided that his presence might not be helpful. Finally he runs into Titus, who had visited Corinth in the meantime, and Paul finds out that the Lord has moved hearts and minds in Corinth. And so we read in 2 Corinthians 7:6-7… “God…comforted us by the coming of Titus…as he reported to us your longing, your mourning, your zeal for me; so that I rejoiced even more.” And that gets us to where our text picks up today in verse 8. 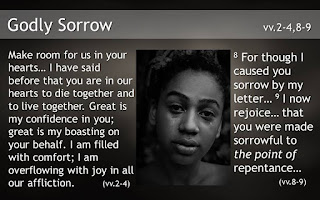 In vv. 8-9 Paul is acknowledging the difficulty of “the talk” in 1 Corinthians. The Corinthians had initially turned against the messenger (Paul) – how very human and common to our own experience! He had acknowledged his own sorrow and doubts over how the message had been received. But then he also declares his love and confidence in this same chapter. Listen to earlier verses from 2 Corinthians 7…

Make room for us in your hearts… I have said before that you are in our hearts to die together and to live together. Great is my confidence in you; great is my boasting on your behalf. I am filled with comfort; I am overflowing with joy in all our affliction. (vv.2-4)

In vv. 8-9 Paul is also acknowledging the difficulty of our human reaction to correction. He recognizes that he caused sorrow and he himself experienced sorrow. But then he also recognizes and describes how, with some passage of time and the work of the Holy Spirit, that same sorrow led to repentance. It led to a change of heart and mind and behavior.

For though I caused you sorrow by my letter, I now rejoice… that you were made sorrowful to the point of repentance… (vv.8-9)

I want to make clear that not all sorrow is like this. Sometimes sorrow or sadness simply recognizes hurt. You get cut and you cry because it hurts. But perhaps here is the difference: a knife can be used to wound or to heal, as wielded by an attacker or by a surgeon. Some sorrow is caused by the circumstances of this world and indicates that we have been wounded or hurt. It’s the body and heart’s response to hurt. Sometimes truth – even loving truth – can hurt though it leads to healing. The things Paul confronted the Corinthians about were harmful, immoral, and disobedient to God. It hurt to hear that called out, but they received it and their sorrow led to repentance and change, truly a gift of God. 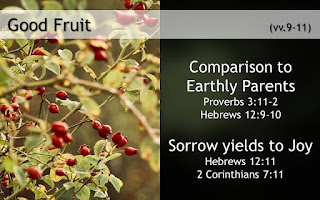 I have seen that play out before in the parent/child relationship. It’s at once one of the most difficult and most wonderful things, made more so because of the love and relationship involved. And let me be clear that I am no perfect parent. Many times I am immature and imperfect and don’t speak the truth in love, but in my own self-defensiveness. Or I withdraw because I think I’ve been hurt. But I have experienced it in parenting a few profound times: having that hard talk, seeing the initial defensiveness and hurt, but hanging in there to the healing on the other side and seeing the freedom that truth and God’s best brings to someone’s life. And, because of that, getting past the awkwardness to something stronger and healthier. That’s why, even though it was a hard confrontation, Paul is able to rejoice in v. 9. It’s not because of the tension or the sorrow, but what it led to. It lead to something stronger and healthier.

I think that’s why both the Proverbs and Hebrews passages came to mind:

“Don’t resent God’s disciplines; don’t sulk under His loving correction. It’s the child He loves that God corrects; a father’s delight is behind all this.” (Proverbs 3:11-12)

“We had earthly fathers to discipline us, and we respected them; shall we not much rather be subject to the Father of spirits, and live?” For [those earthly parents] disciplined us for a short time as seemed best to them, but God disciplines us for our good, so that we may share His holiness.” (Hebrews 12:9-10)

And here’s a direct connection to Paul’s words:

“All discipline for the moment seems not to be joyful, but sorrowful; yet to those who have been trained by it, afterwards it yields the peaceful fruit of righteousness.” (Hebrews 12:11)

Paul describes some of that fruit of righteousness in his letter to Corinth. Some of it may not have seemed ‘peaceful’ but it was addressing serious sin, some of which didn’t go down without a fight. He writes of the “godly sorrow” the Corinthians experienced:

Behold what earnestness this very thing… has produced in you: what vindication of yourselves, what indignation, what fear, what longing, what zeal, what avenging of wrong!” (2 Corinthians 7:11)

We aren’t used to using many of those words in a positive way. Neither are we used to using ‘sorrow’ in a positive way. But for each Paul has uncovered for us a godly version that draws us closer to God. That is represented here by the repeated use of “what ____.” It’s not the usual sense of those words but a godly version that is unusual. So insert the word ‘godly’ to help understand those fruit of godly sorrow. When it leads to repentance, godly sorrow produces an earnestness about what is right: a godly vindication of the difficult truth we may be wrestling with, a godly indignation against the sin that entangles us, a godly fear of the Lord, a godly longing  and zeal for what is true and right and good, and a godly avenging or undoing of our wrong choices… a repentance. 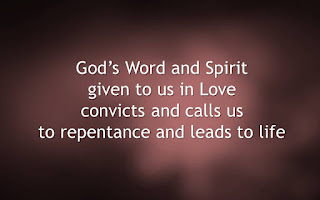 That’s what this series is about: the things that God does before we even think about repentance. In this case we see that God’s Word and truth convict us and call us to repentance and to change. And though that may for a moment bring sorrow, it is a godly sorrow that leads to repentance and to life. May we listen for God to speak so to us. Amen.

Previous
Making the Way for Repentance
Next
What Winning Looks Like