Who is Jesus and what is Jesus like? And what difference do those answers make in your life? Those are the questions we’ll keep asking this Fall in our “Come and See” series. I can think of no better way to understand faith and connect with faith than to check out Jesus. Last week we read the introduction to the Gospel of John, an eyewitness account of Jesus ministry and teaching. In that introduction John said that Jesus came to show us God, to explain Him. And time and time again Jesus invited people he encountered to “come and see” what he was about. That’s what I hope for us to do today and in the coming weeks. It may be so that you can introduce someone else to Jesus, as Philip did for his friend Nathanael in our text last week. Or it may be so that you can be re-introduced to Jesus in a fresh way and leave with your own faith and relationship with God renewed.

Today we look at two different events in the life of Jesus. Both are fairly well known, but I don’t know that I’ve ever studied them together, even though they both come in the same chapter of John. But I saw some new common threads between them this time around. I’d like to briefly walk you through some background and details of each story, then look at those common threads and why they matter for our own faith and life. 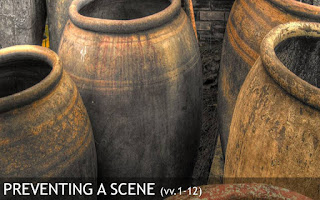 The Wedding – There’s so much that can capture our attention here. First, it’s a wedding! So many other stories are by the lakeshore or in the Judean wilderness or in Jerusalem near the Temple. But this is a glimpse into ordinary Jewish life. Jesus was there with his family as well as his disciples. He must have known one or both of the families. In that day a wedding was ceremony and reception rolled into one, and often lasted several days. It was a big deal! But much was the same as we might think. The family hosted and there was food and drink. And one of the most socially embarrassing things, then or now, would be to run out of food or drink for your guests. And that’s what happened… they ran out of wine.

Now as fascinating as it is to us, we simply don’t know as much as we’d like about why Jesus turned to Jesus to tell him they were out. Was he supposed to go buy some more? Did she know he would do a miracle? I don’t know. But she brought it to his attention and told the servants to do whatever he said to do. There is certainly a part of me that wants to read that as Mary having seen Jesus do miraculous things around the house, but we just don’t know. His response is also pretty cryptic: “What does that have to do with us? My hour has not yet come.”

Now here’s where it gets really interesting. He doesn’t send them out with money to the store. He doesn’t strike a rock and wine pour out of a crack in the hillside. He tells the servants to go fill up the ceremonial washing pitchers with water. Let THAT detail stick. And that was a lot of water – something like 150 gallons worth… those were some big water pots. And then he told them to draw some out to take to the headwaiter. And it had become wine… really good wine!

And John reflects on the event (later) and says of this: “This beginning of His signs Jesus did in Cana of Galilee, and manifested His glory, and His disciples believed in Him.” So, it was a semi-private miracle. More than Mary saw it, but it was not on full display quite yet. But the disciples saw and, seeing the power of God, they believed. Though Jesus did something amazing and some saw and believed, he also prevented a scene of embarrassment and shame to the family hosting the wedding. I describe it that way because the very next thing that happens is just the opposite. Jesus MAKES a scene… 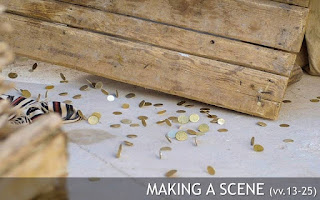 The Temple – The next story starts in verse 13. We don’t know exactly how much time has passed, but verse 13 contains an important date marker for the Gospel of John. The Jewish Passover was near and Jesus went like so many did up to Jerusalem. Several different Passovers will be noted between this event and the end of John’s Gospel. And it is at Passover that Jesus is crucified. As I said before, I have preached on the Wedding at Cana before and I have preached on what comes next before, but never together in the same sermon. And it is a striking contrast. At the wedding Jesus prevented a scene of embarrassment and shame. In the Temple, Jesus made a scene and it was one that the religious leaders never forgot.

Jesus went to the Temple in Jerusalem and found people selling animals for sacrifice as well as money changers. Both the sale of animals and the ability to change currency was a convenience and booming business, for many traveled from far away and it was easier to buy an animal than to travel long distances with one. Likewise, it was helpful to be able to change foreign currency. Yet there was something about this that angered Jesus to the point of taking action. He actually turned over their tables and made a whip out of cords and chased the animals and people out of the Temple. Talk about a scene!

To those he chased out he said, “Take these things away; stop making my Father’s house a place of business.” (v.17)

Clearly those present saw more than an angry Rabbi. They asked for a sign to show Jesus’ authority to do this. Isn’t that an interesting thing to say? It let me know there was more going on here than you or I get on a quick read. Well, John also tells us that the disciples remembered one of the Psalms that said, “Zeal for God’s house will consume me.” King David was the one who wrote that and, as a reminder, the Messiah was believed to be one like King David returned to lead God’s people. It is likely that Jesus’ action was taken to be some kind of Messianic claim… the kind of thing that King David might have the guts to do.

And he answers their question about a sign. He says, “Destroy this Temple, and in three days I will raise it up.” Those there thought that absurd… it had taken forty-six years to build. But John explains that he was speaking of the temple of His body and later the disciples would remember these words and understand. We read that many believed after observing the things Jesus was doing. (v.23) But he did not entrust himself to those who were quick to name him Messiah. He was just getting started!

Taken by themselves, both stories point to Jesus’ power and authority to do amazing things. And it’s important to know that miracles weren’t magic or magic tricks. Sometimes, like the water and wine, they defied explanation. Sometimes, like chasing folks out of the Temple, they were significant more than unexplainable. The purpose of Jesus’ miracles or signs were to point to the power and authority of God. Throughout the Gospels Jesus will demonstrate that power and authority, over sickness, spiritual powers, earthly powers, and more – even death. John told us the reason back in chapter one: Jesus shows us the power and glory of God.

But today I want to focus on something a little different as I make application and draw to a close. When I consider these two events together, I see something I did not notice before. In both cases, Jesus is taking religion and re-purposing it or re-directing it back to God. Let me explain… 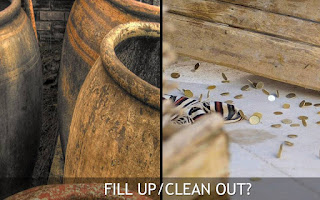 At the wedding, Jesus uses the large waterpots used for religious ceremonial washing to save embarrassment, to bring life to the party, and to demonstrate the power of God. Elsewhere he explains that he didn’t come to do away with the old religious laws and practices, but to fulfill or complete them. The ceremonial washing was an important aspect of Jewish religious practice. It helped keep kosher and follow the cleanliness codes in the Hebrew scriptures. But they did not bring life. Their purpose was to point towards God’s holiness and invite human obedience. But now God was here in the flesh! The one who was the Light and Life of the world was present. So he took the religious vessels and filled them with life, with God’s power, with his own presence in blessing the party.

In the Temple, Jesus also engaged religious practice. Surely the sale of animals and changing of money began with good intent. But it had turned into a way to squeeze money out of travelers who were eager to fulfill the religious rules. The offerings that were supposed to direct people to God’s mercy and grace had become a means of taking advantage of people. The focus on being a house of prayer was overshadowed by the commerce done in religion’s name. And so Jesus overturned those practices and drove them out, again filling the space with his presence and pointing to the power and glory of God.

So what do we do with that? Is it simply making sure we are adequately supplied at weddings and don’t sell products in the gathering area on Sundays? (We pretty rigorously don’t, by the way!) No, I think it’s more than that. Religion and religious practices are the structures we put around worshiping God. And it becomes all too easy to do one of two things: either we 1) keep up the practices and find ourselves empty; or 2) we get off track with our practices and eventually find ourselves looking in the wrong direction.

What do “good Christians” do? How would you fill in the blank? They…. go to church… read their Bible… pray before meals… don’t cheat… don’t cuss… I could go on and on for a long time and I’m sure you could too. But is that the definition of Christian? Some of those things might be good things to do as we trust, love, and follow Jesus Christ, but they are practices. They are behaviors. And it is easy to keep checking them off week after week and year after year and wake up one day feeling empty and disconnected from God. God is not church attendance any more than marriage is dish-washing. Both are great things to do for someone you love, but in and of themselves they are or can become empty vessels. I believe Jesus doesn’t want to punish or scold you for any of those things. I believe he wants to fill you back up with LIFE, with joy, with purpose… with himself.

What about the other story? I think there are other things that Jesus needs to overturn in our lives. I have heard it said that every vice is a twist on a good and God-given yearning. Put other people down so you can look good? God made us for dignity, in His image, and we yearn for it. But apart from God we will do all manner of things to try to feel worthy, feel wanted. Beating yourself up with shame and guilt? God gave us a conscience, but also offers us grace and freedom. But we look in other directions. I believe there are some things Jesus would overturn and drive out of our lives so that we would again know the power and presence of God. Please note: he would not drive US out of God’s presence, but clear out the temple of OUR lives of the clutter, distraction, and harmful practices.

Previous
The Word
Next
Night Visitor