Who is Jesus and what does it mean to be a Christian? Those are not the kind of questions that are easy to ask, in OR out of church. If you ask it out in public, like to your server in the middle of lunch, or to the kid sitting next to you in geometry, you are likely to get a look. Or at least that’s what we expect. And, ironically, I think a lot of folks would be hesitant to ask at church because we have this kind of cultural expectation that people at church have it together and have it figured out. Ha! My first response is, “Welcome to Good Shepherd!” We don’t have it together and we haven’t figured everything out. So ask away! In fact, if you ever come to one of our Sunday morning classes or Bible studies or Wings Night or any other gathering, I hope that will be clear.

But even if you don’t believe me, this morning’s reading is just the thing. It’s the story of a man – a prominent religious leader, of all people! – who sneaks to see Jesus at night, when people won’t see him; and he asks those very questions. And we get to listen in. We get to read and hear this very open conversation back and forth between Jesus and Nicodemus (I’ll call him ‘Nick’ for short). So let me describe the conversation to you and then we’ll ponder what that might mean for us today. 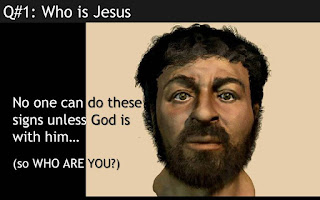 Nick actually didn’t ask this question outright. But it was the underlying question. Basically, the story was getting out about Jesus. He is credited with some crazy-sounding stuff… people’s lives changed, miracle stories, claims to divinity. What’s it all about and is he for real? There must be a good explanation to all this – some good morals or life-lessons or something to learn from Jesus. But nothing more than that, right?

That was basically how Nick led off: “Everyone knows you are a teacher, even a GODLY teacher. God is with you, that’s clear.” There was no question, but throw in all the context and you have an interesting situation. If everyone really knows it and that’s all it is, why is Nick sneaking around at night? What else could be the explanation? Is Jesus something MORE than a godly teacher? What could that ‘more’ even be?

And Jesus doesn’t give any kind of direct-sounding answer to that setup. He says, “Truly, truly, I say to you, unless one is born again he cannot see the kingdom of God.” Well I guess that’s a kind of answer. It’s basically saying, “Unless this ‘born again’ thing happens, you really can’t judge who or what is of God.”

So the follow-up is obvious, right? What is “born again?”

Question #2: Can I get a practical answer? 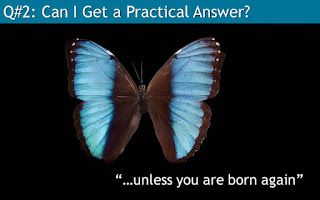 That’s exactly what Nick asks, except he shies away from the spiritual explanation that might be evident to us when we hear “born again.” But imagine if you were hearing it for the first time. What if Jesus had said to you, “Well, you’ll never understand unless you ‘butterfly’.”

Now Nick wasn’t slow; it just wasn’t apparent where Jesus was going. “Butterfly?” you ask. “Do I need to flap my wings? Get some color in my life? Take up swimming?”

“Jesus, are you comparing me to a bug?” I think Nick latched on to the more familiar of the two things Jesus said when he responded. He mentioned birth and he mentioned the Kingdom of God. And religious leader or not, he understood birth. “So is an old man born again? How exactly does that work?”

Said another way, I hear Nick just asking for a practical answer that he can use. He came to check out Jesus and see what he was about, and now he’s getting birth and the Kingdom of God.

I feel his frustration. How many times have you gone to church, talked to a Christian, read a bit of the Bible, or otherwise been looking for a practical answer to something and gotten what sounds like spiritual mumbo-jumbo in response.

Should I go back to school and finish my degree? – “Trust in the Lord and lean not on your own understanding.”

Should I break up with my boyfriend or girlfriend? – “Rejoice in the Lord always, and again I say rejoice!”

How much easier would it be if God would dispense advice like a Magic 8 Ball? Or like “Dear Abby” in the paper? “Dear Confused in Charlotte…”. All Nick wanted to do was confirm that Jesus was a legitimate teacher and in two sentences he’s headed towards the deep end.

Question #3: What do you mean? 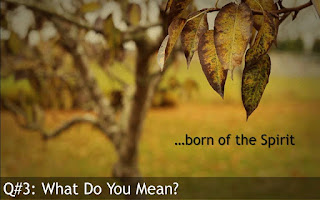 Jesus doesn’t miss a beat: “Unless one is born of water and the Spirit he cannot enter into the Kingdom of God.” He goes on to say that there is physical birth (of the flesh) and there is spiritual birth (water and the Spirit). He continues, “Don’t be amazed (or confused); I’m talking about spiritual stuff here… Spirit of God stuff.”

He elaborates a bit further about the Spirit of God. It’s like the wind – you understand that, right? You can’t see it, but you can tell when it is blowing; you hear and see the effect of it in the world around you. It’s like that with the Spirit of God, blowing through the lives of people.

“So that’s what I mean,” says Jesus. “Being born again is something God’s Spirit does in you by its own initiative and it allows you to catch a glimpse of what God is doing in the world.”

Then Nick says, “How can these things be?” Or my paraphrase, “Come on, really?”

And Jesus doesn’t let that response go. As a Pharisee, Nicodemus is a “teacher of Israel” – and Jesus names him as such and asks if he really doesn’t understand these things. And then Jesus asks this piercing question: “If I told you earthly things and you do not believe, how will you believe if I tell you heavenly things?” (v. 12)

Human brains can’t really understand God directly. We do much better with analogies and comparisons and the indirect experience of God’s Spirit, like the wind blowing through a tree. God has given us examples and experiences to help us, not primarily to UNDERSTAND so much as to BELIEVE.

At this point Jesus reminds Nick of a famous story (at the time). It was in the history books of the Jewish people, as well as their collective memory. It was the time when Moses lifted up the serpent in the wilderness. It’s in Numbers 21:1-9 if you want to look it up later. Basically in that story from their history, the people had been disobedient and were complaining bitterly that they were better off without God. And God sent poisonous snakes among them. Many began to get sick and die from snakebites and Moses prayed for God to intervene and show mercy. So God instructed Moses to make a bronze snake and put it on a pole and lift it up high among the people. And anyone that would come look on it in faith would live. It’s a strange story, to be sure.

But Jesus tells Nick that God is going to do something just like that: lift the “Son of Man” up high so that all who BELIEVE will live.
And then we arrive at the most famous verse in the Bible. Before I get to that, let me summarize what all has happened.

Someone came under cover (of darkness) to check Jesus out and try to understand better who he was. The long and short of the conversation was that Jesus is not so much to be understood as to be believed. It turns out that when one believes, God does a kind of spiritual eye-opening maneuver that gives us understanding; but that’s the order in which that works, not the other way around.

That goes against the way we expect, right? If we want to know something, we study up or go to school or ask questions. And I don’t fault Nick for doing that. In fact, it’s what I would have done. But Jesus responded, not by saying, “Learn about me,” but by saying, “Trust me.” That’s the difference between understanding God and believing God.

And that’s the context for the next verse, which broadens out far beyond the individual conversation between Jesus and Nick, to encompass the entire world.

“For God so loved the world, that He gave His only begotten Son, that whoever believes in Him shall not perish, but have eternal life.” 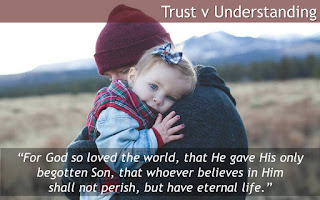 Ever since my children were babies I have told them that I love them. Did they understand how and why and to what extent? Not at first; and only in part, even now. But have they come to believe it? I sure hope so.

God loves you. God loves me. Do I understand that? Only in part, and probably only the tiniest part. But do I believe it? Yes; and that is what has led me to trust that declaration in John 3:16. I believe God loves me and has given extravagantly out of that love; and that has and does save my life.

Belief goes on to shape behavior. Jesus circles back to Nick, challenging him in those final verses that the one who believes lives life out in the open, in the light. Interestingly enough we do run into Nicodemus again later where he defends Jesus’ legal rights publicly (John 7:50) and then asks permission of Pilate to take Jesus’ body after the crucifixion (John 19:39). It seems as if he may have come to believe and be “born again.”

So for each of you here today, wherever you are here with faith or doubts or questions or some answers, what can we take away from this encounter?

For one, it’s okay to ask questions. I sure don’t understand everything about God, so you should fit right in!

Jesus prioritized believing over understanding anyway. We might say that we can’t believe until we understand, but he seemed to be saying something different… that belief has more to do with trust than with intellectual knowledge and that trust actually opens up understanding in a way that won’t happen otherwise. That itself is a head-scratcher except that I’ve experienced it with my own children… the ability to trust and learn to love without understanding all the details.

And finally and related to that personal experience, I hope you heard in all this God’s declaration of love for you. How do you respond to that? What do you do with that? If what Jesus is saying is true, then responding to and trusting that love will open up doors you may not even know you had.

It’s something to ponder. It might just be everything… if Jesus is who he claimed to be.

One thing I know about this place; we’d love to ponder those things along with you. Amen.