Spiritually, emotionally, realistically, we are such a mixed bag of good and bad, mature and immature, strong and week. There is a notable passage in Romans where the Apostle Paul himself bemoans the warring nature within of doing what he doesn’t want to do and not doing what he does want to do. And it runs the gamut from “I don’t want to eat those cookies… I’m going to eat those cookies” to the “same lips praising God and cursing others” to those who earnestly want to serve the Lord sometimes consciously turning away in continued rebellion and sin. At least that’s been my experience with myself and the people I know… and scripture seems to back that up. So what are we to do? Do we just give up and give in? Is there a standard of goodness we are to reach and then we’ve made it?

Today I want to offer an example, an illustration, and some words of hope. They all come from the different texts we’ve heard today and my hope is that we will leave with a realistic understanding of the resources and limits of our humanity and God’s gracious provision in the midst of that. 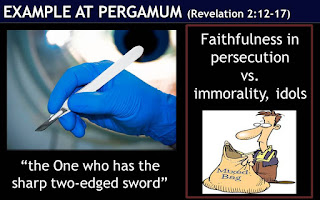 In the third of the letters to the churches in Revelation, Jesus speaks a message to the church in Pergamum. First he identifies himself as “the One who has the sharp two-edged sword.” (v.12) Like the surgeon’s scalpel, the Word of God can open us up for truth, restoration, and healing and also cut away the malignancies of sin. It cuts both ways, and Jesus’ Word here is going to do that very thing. Like the Christians in Smyrna which we looked at last week, the Christians in Pergamum are suffering persecution for their faith. Jesus commends them particularly for their faithfulness in such a difficult context.

But these same faithful and courageous Christians also are doing something which Jesus has against them. They are being led astray by several false teachers. Some are dabbling in the pagan worship that sacrificed to idols and engaged in immorality associated with that pagan worship. Others were following the teaching of the Nicolaitans, a group mentioned in the first letter from two weeks ago and thought to find the pagan sexual rituals permissible in an extreme form of anti-legalism.

It’s an example set in an early church context, but which I think has personal and modern application. We too may desire to follow Jesus and even do so in some commendable ways. But it is so easy to let deception or sin sneak in. We can believe lies we hear in the culture, lies whispered by the evil one, or even lies we tell ourselves. And the next thing you know we are doing the things we don’t want to do (or at least that we know we should not want to do).

Consider where you may be led astray or tangled up. And let’s turn to the illustration in Hebrews to consider some of the resources available to us. 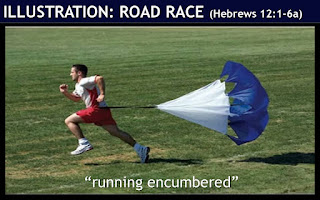 In Hebrews 12:1 there is a helpful illustration of the challenges of following Jesus. It is like a race – picture something like a cross country race. We have a “great cloud of witnesses” cheering us on and witnessing our race, but it is also easy to get slowed down or tripped up by two different types of challenges. One is encumbrances, burdens which are not part of the race. Picture someone running a race with a heavy backpack on. Now it’s one thing if you are training for the Army, but in a standard foot race it would be foolish. Yet – and here’s the point – so often we cling to something in our life that is not part of following Christ and, in fact, weighs us down on that spiritual journey. It may be a habit or addiction, or unresolved issues from the past, or an over-dependency on our own strength over those of God. It is particularly tragic when one of Jesus’ most memorable invitations is “Come to me all who are weary and heavy-laden and I will give you rest.” 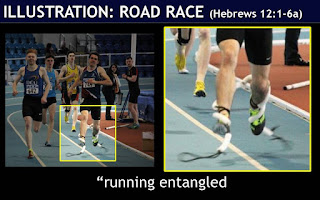 The second challenge in following Christ are the things that would entangle or trip us up in this race. Such things are specifically tied to sin and paint a vivid picture of how sin can trip us, injure us, even take us out of the race for a time. Sin is nothing to be casual about; it directly affects our ability to follow Christ well. Note that it does not prohibit us from trusting Christ or following Him; Jesus die that our sin might not separate us or disqualify us from God. But if we don’t deal with it, lay it aside, and avoid it, it can still be major and dangerous entanglement in our lives.

The contrast to encumbrances and entanglements in the race illustration is to “fix our eyes on Jesus, the author and perfecter of faith.” (v.2) Not only does that keep our focus in the right place, he is a resource to us, having faced the same challenges of temptation and sin and done so victoriously. We are also reminded that it’s not an easy thing – again, like running. A good coach will train, encourage, and even discipline the athlete in order to overcome obstacles. The last part of the Hebrews 12 text speaks of the Lord’s discipline with this wonderful (and challenging) sentence: “For whom the Lord loves He disciplines.” (v.6a)

Jesus is our inspiration, our coach, our helper, and our physician. God has provided all the resources needed to follow Christ well, if we avail ourselves of them! And that is the theme of Psalm 24, our final text this morning. 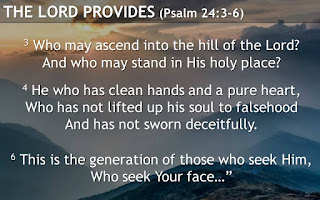 There is an interesting dynamic going on in the “race” of following Jesus. We are to avoid sin and yet we are sinful. We are to lay aside burdens, but we are people prone to carrying them. It’s the whole “mixed bag” phenomenon going on at Pergamum and with us, if we are honest. Like Paul, we do the things we don’t want to do and don’t do the things we do want to do. It’s fine to say that following Jesus involves laying burdens down and avoiding sin, but really, who ever does that well?

Psalm 24 puts a finger right on that tension and points us toward the answer that is Jesus Christ. The Psalm asks: “Who may ascend into the hill of the Lord? And who may stand in His holy place?” (v.3) And before we have a chance to wonder if we might qualify we read the answer: “The one who has clean hands and a pure heart, who has not lifted up his soul to falsehood and has not sworn deceitfully.” (v.4) And with that I immediately realize, “Not me!” And yet, only a verse later we read “This is the generation of those who seek Him, who seek [God’s] face.” (v.6) So, it’s impossible and yet it’s what God desires of us.

And Jesus is the one who makes it possible for weak, injured, burdened, sin-prone racers like us to not only enter into the race, but complete it victoriously. He has gone before us and, as noted, he goes with us as encourager, physician, coach, and example. That’s the role he is in with Pergamum, and it is the role he is in with us. 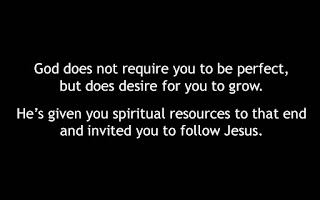 Back at the end of the words to Pergamum in Revelation, Jesus asks for repentance. He offers victory and a new start. And that is just what he offers us. His desire is not that we struggle with burdens alone; his desire is certainly not that we would be tripped up or taken out by sin. Rather, he says “Look to me; run after me, and I will help you grow in purity and faith, holiness and joy.”

Consider again the things that burden you or trip you up. Practically, tangibly, prayerfully, how might you release those and fix your eyes on Jesus? What steps could you take to do so? What new habits do you need to build; what old habits do you need to stop. Are there places or people that tangle you up? Are there places or people that build you up in faith?

Here’s the essential message for us to Pergamum: you are a mixed bag. God does not require you to be perfect, but does desire for you to grow. He’s given you spiritual resources to that end and challenged you to run the race of following Jesus Christ. Answer the call! Amen.

Previous
Suffering
Next
Lost Love
Yesterday The Light of Love