Today is the last of our “Come and See” messages from the Gospel of John. However, I’ll still be inviting you to come and see Jesus as we move into some Advent and Christmas stories in the coming weeks. Today we end with one of the significant things to know about Jesus: he is KING! The first part of today’s text describes the events we usually read for Palm Sunday, the Sunday before Easter. But, we usually don’t use John’s version of that story because it is pretty short and lacks some of the details in the other Gospels. But there are some things unique to John’s account and we’ll focus in on those today as we try to understand what it means that Jesus is King.

I’m going to talk about the common expectation for the Messiah in Jesus’ day and then look at how there was MORE to Jesus’ kingship, as taught in scripture and as demonstrated in his teaching and ministry. And we’ll consider what it means for Jesus to be King of our lives. 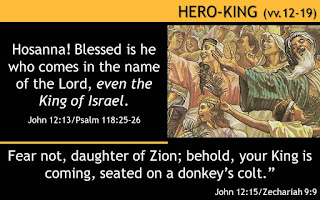 In Jesus’ day people were looking for the Messiah. We’ve talked about this before. In the Hebrew scriptures God had promised to send a Messiah, or “anointed one.” This person would be a descendant of King David, the greatest king in the history of Israel. And he would be like David, blessed by God. Because the Roman Empire had conquered the known world, the common understanding and hope for the Messiah by the time Jesus lived was that the Messiah would be a warrior-king who would overthrow Rome and re-establish the kingdom of Israel on earth. 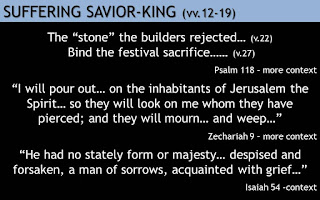 Psalm 118 does have that memorable verse that the crowd quoted. I’ve noted that “Hosanna” isn’t a kind of Hallelujah or praise to God, but literally means “Please save us!” or “Save us now!” It is a cry for help. Psalm 118 also charts a course for the work the Messiah will do, particularly in vv. 22-29. The Messiah will indeed come as saving King, chosen by God; but the Messiah will first be rejected (v. 22) and a great sacrifice will be made (v. 27). The Messiah doesn’t come to save through earthly battle, but through spiritual sacrifice.

And the context in Zechariah is similar. The quote about a king riding on a donkey comes in the middle of a chapter on earthly victory of God’s people. But just a few chapters later, we read this powerful text in Zechariah 12:10:

I will pour out on the house of David and on the inhabitants of Jerusalem, the Spirit of grace and of supplication, so that they will look on Me whom they have pierced; and they will mourn for Him, as one mourns for an only son, and they will weep bitterly over Him like the bitter weeping over a firstborn.”

John the disciple wrote in v. 16, “These things His disciples did not understand at the first; but when Jesus was glorified, then they remembered that these things were written of Him, and that they had done these things to Him.” And John also notes the great attention generated by raising Lazarus from the dead (v. 17) and other miracles. It is no wonder that the crowd didn’t stop to do careful scriptural study. We have the advantage of hind-sight, and further explanation of the New Testament.

While it is not the main point of this sermon, this should give us pause to consider where we might have overlooked the actual Jesus presented in scripture and instead constructed a savior or God of our own desire and design. One good guard against that mistake (and related disappointment down the line) is to keep going back to scripture and digging deeper and deeper to discover who God is, particularly as revealed through Jesus. That task is never done, particularly because scripture reveals Jesus to be invitational, and along with knowing him more and more deeply, we are called ever more deeply to release the things we cling to and follow after him. 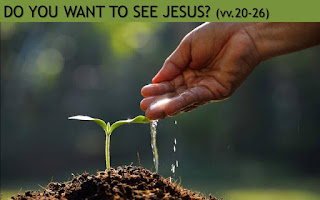 The second part of today’s lesson contains details not included in the other Gospels. It provides a description of some folks who wanted to “Come and See.” It also provides Jesus’ own description of his work as Messiah.

First, John tells us that there were some Greeks who sought out the disciples, saying, “Sir, we wish to see Jesus.” These were not Jewish people living outside Jerusalem, but non-Jews who demonstrated interest and faith in the God of the Jews.  They were in town for the Passover Festival.  While later expansion of the Church would include Gentiles like these, Jesus had primarily focused his ministry on his own Jewish people. This gives us a glimpse of the scope of his understanding of God’s Kingdom. His message is basically the same as to anyone: listen, believe, and follow.  Just as Jesus didn’t distinguish between a tax collector and a Pharisee, or between men and women, neither does he between Jew and Greek.  Indeed, this encounter anticipates Paul’s declaration later in Galatians 3:28, “There is neither Jew nor Greek, there is neither slave nor free man, there is neither male nor female; for you are all one in Christ Jesus.”

In response to these Greek seekers, Jesus seems to speak of his own death, using the image of a seed being planted as ‘dying’ to bear much fruit. But he eventually gets back to the core message of “listen, believe, and follow.”  Perhaps here, near his death, he is proclaiming what will become the heart of the Gospel, that one died for all who believed.  Then, having given the Greeks the opportunity to listen and believe in what he is about to do, he invites them to follow.

What comes after “Come and See?” Following is what comes next. After giving the Greeks the opportunity to listen and believe, he invites them to follow: “If anyone serves me, he must follow me… and the Father will honor him.” (v.26) This is the same invitation Jesus gives to every person, and to you.

“Come and see” Jesus – he is more than a teacher, a philosopher, a good man. He claimed to be God in the flesh and the Messiah sent from God. He is King, not the king we want, but the king we need. He is King of a spiritual Kingdom and he is a humble, sacrificing, gracious ruler. His invitation to each of us is to hear that news, believe that news, and follow after him in service to God. So I want to ask three questions: 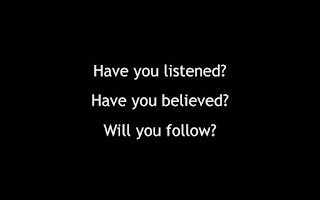 Have you listened? Have you checked Jesus out for who he claimed to be?

If so, have you believed? Do you believe? Is he trustworthy? Will you trust him?

That’s the invitation. May God give each of us ears to hear and hearts to follow! Amen.

Previous
Deep Feelings
Next
Get Ready