Are both the word and the sacraments then intended to focus our faith on the sacrifice of Jesus Christ on the cross as the only ground of our salvation?  (Q. 67)
Yes! In the gospel the Holy Spirit teaches us and by the holy sacraments confirms that our entire salvation rests on Christ’s one sacrifice for us on the cross. (Rom. 6:3; Gal. 3:27)

How does baptism remind and assure you that Christ’s one sacrifice on the cross benefits you personally?  (Q. 69)In this way: Christ instituted this outward washing and with it promised that, as surely as water washes away the dirt from the body, so certainly his blood and his Spirit wash away my soul’s impurity, that is, all my sins. (Mark 1:4; Luke 3:3)

There are a lot of distractions – feelings like curiosity, impatience, boredom.  There are visual distractions that occupy our attention.  Today’s text is about listening to God’s voice in our lives.  And so, it also addresses the question: What does God want of me?

Today’s sermon is also going to be a little different.  Instead of a more typical outline or structure I want to highlight ten parts of the scripture reading – just ten thoughts on what it means to listen to God.  We can count them off together. 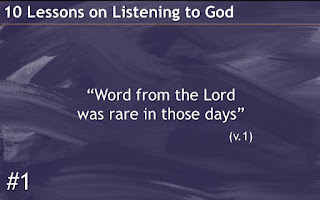 Probably the first thought that comes to mind in thinking about God speaking to us is that we’ve never heard God’s voice out loud.  We don’t see talking, burning bushes, and we don’t see the heavens open and hear God’s voice thunder out divine messages.  The first point of connection between us and the story of the boy Samuel is that scripture says, “In those days the word of the Lord was rare.”  God was no longer in the habit of making personal appearances or parting the heavens with his voice.  If you had told the boy Samuel to listen for God’s voice, he would probably have had much the same response as we would: “Sure, I’ll listen; but you don’t expect me to actually hear anything, do you?”

Scripture realistically described the way things were in Samuel’s day, and I want to be just as realistic with you.  We talk about listening to God and people say things like, “God told me to do thus and so.”  But I’ve never met anyone who ACTUALLY heard an audible voice.  That’s not what I’m talking about.  God could certainly still communicate that way, but that’s not what we are listening for.  So what should we expect to hear if we listen to God?  How are we supposed to find out what God wants us to do?  Let’s continue… 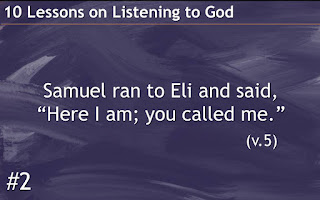 The boy Samuel was lying down one night and God called his name, “Samuel, Samuel.”  So God did speak after all!  If only God would call our name, we’d come running, right?  Well Samuel went running… to Eli – “You called me, master?”  Eli responded, “No, no – go back to bed, Samuel.”

What if God has spoken, whether audibly or in Spirit?  What would we do?  I know for myself it would be awfully easy to attribute that voice to something or someone else.  Did Heather say something?  Oh, that’s just my dad’s voice in my head…. I hear it often before I make decisions.  Or that’s my conscience again, speaking up out of turn. 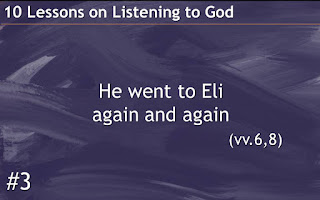 The same thing happened again – twice!  God called Samuel’s name, “Samuel, Samuel!”  And twice more Samuel jumped up and ran to Eli.  By the third time, he must have been thinking, “I’m just hearing things… or Eli’s playing a joke on me!”  But in Samuel’s favor, he did respond each time.

Our experience with God’s voice is through God’s Word in scripture and God’s Holy Spirit.  God speaks to us with both, and each confirms the other.  But what happens when we don’t recognize God speaking?  By the third or fourth or tenth time, we’ve learned how to “tune God out” or numb ourselves to what God is leading us to do.

In seminary, once, I went to a class in which we studied the parable of the Good Samaritan.  The professor even told us about a psychology experiment conducted on the Princeton Seminary campus a few years earlier.  In that experiment, a Princeton student dressed like a homeless person and sat outside the seminary cafeteria asking for food.  One after another future minister walked right by.  Well, within a day or so, I was driving and saw a car broken down with the middle-aged driver changing the tire.  With the lesson of the Good Samaritan within me, I stopped and asked if he needed assistance.  He was fine, but thanked me for stopping.  The next time, I didn’t stop – was that “voice” I heard from God?  Did God really want me to stop and help every single time?  Eventually, I was able to keep driving without so much as a passing thought. It’s easy to tune out. 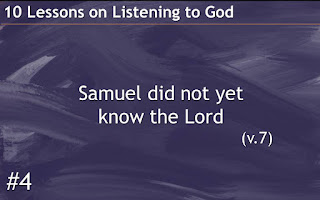 The passage says that Samuel did not yet know the Lord.  I guess that is a reasonable excuse, though Eli soon set him straight.  It raises the question for us, though: When someone talks about seeking God’s will or listening for God, do they know for whom they are listening?  Is God’s voice the same thing as the conscience?  Is it a psychological construct to help us deal with conflicting emotions or psychological damage?  Is it whatever the church says it is?  All of these have been substituted for God’s “voice,” but scripture testifies that God has spoken and continues to speak in several ways.  God spoke through the Incarnation.  When God put on human flesh and walked the world in the person of Jesus Christ, he spoke a clear message of good news, salvation, and redemption.  Scripture testifies to that Word – in the Law of God, in the voice of the prophets, in the history of God’s people, and in the teaching and history of Jesus Christ and his Church.  Finally, God sent the promised Holy Spirit to live in our hearts.  God’s Spirit speaks to our spirits that same Word, lived out in Christ and written in Scripture. 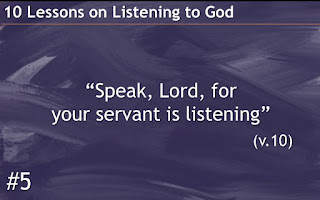 Wisely, Eli realized what was going on – that the Lord was speaking to Samuel.  In Eli’s words we receive instructions for how to listen.  Eli told Samuel to respond, “Speak, Lord, for your servant is listening.”  We are to listen for God’s voice with humility and with open ears.

Already, our youth are signing up and preparing for a summer mission trip.  One of the biggest lessons we often bring back from mission experiences is the need to reduce the distractions in our lives.  We all realized that we have so much noise in our lives that we rarely had the silence or attention necessary to focus on God.

And so often, when we do buckle down to church-stuff, we are singing, preaching, praying, announcing, or fellowshipping.  All good things… but very noisy.  God may well be speaking, but who would hear?

Let us try on Eli’s words for ourselves; and not just the words, but try them on as an attitude of the heart: “Speak, Lord, for your servant is listening.” 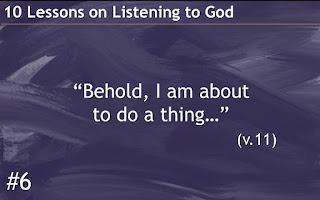 Once Samuel knows who he is listening for and once he quiets himself to hear God speak, God has a message for him.  “See, I am about to do something that will make the ears of everyone who hears of it tingle.”  In Samuel’s case, God wanted him to speak God’s Word to Eli concerning his family.

God has a message for each one of us.  In some form or another, God’s Word to his people is consistent – love and serve me with all that you are and all that you have, and extend that love to those around you.  It may take the form Jesus used, “Follow me!”  It may sound like the Golden Rule: “Do unto others as you would have them do unto you.”  It may be very specific: “Forgive your wife for how she hurt you and try to show her the love of God.”  “Help the older man next door… he lives alone and is lonely.” “Speak up for justice and what is right in your community.”

Listen!  God has something for each of us to hear. 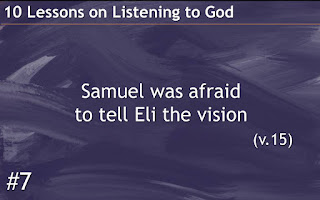 God was judging Eli for being a poor father to his sons.  His two priest-sons were evil, and God rendered judgment against Eli and his descendants.  Samuel was only a boy, and God told him to speak that message to Eli.  Clearly, Samuel was hesitant and fearful. Sometimes what God wants us to hear is not easy or safe.  Sometimes our love for God demands that we confront evil or show tough love toward a child or say no in the face of great pressure. 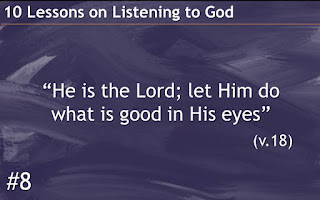 Eli was a man of God, even if he had fallen short in his parenting.  He knew that God’s judgment was ultimately good because God was the Lord.  When Eli empowered Samuel to speak a very tough sentence against him, he proved himself a servant of God.  Love for God means following and serving God in everything.

I remember being disciplined as a child.  It was no fun from a child’s perspective!  There was one age-range where switching was the form of punishment, and I got to go pick my own switch. Anyone else?  But my mother was able to communicate, even during that discipline, that she loved me and ultimately was concerned with my safety and happiness.  And somehow, I believed her and understood.

Listening to God’s Word requires the humility of a servant and the obedience of love.  Sometimes we would rather tune it out, but God’s Word is always the way of life for his people.  He is the Lord; let him do what is good in his eyes. 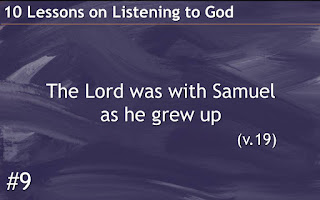 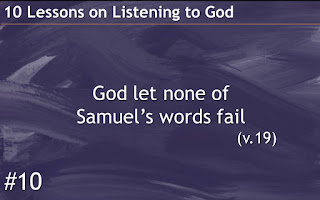 God’s task for Samuel was to speak God’s Word to the people.  God gave Samuel power for that task.  So also, God gives us power for whatever he calls us to do.  It is the same Holy Spirit that speaks God’s Word to our spirit that “fires” our hearts for the task.  The Hebrews had one word that meant hear and obey.  Our word ‘listen’ comes closest in meaning.  When we listen with a servant’s heart, we hear and obey God’s Word to us, and God gives us the power to follow him.

This verse is a great encouragement to me for situations where I have tried to be faithful to God and have seen no immediate fruit.  Sometimes working with children or youth it takes years to accept the Gospel. Sometimes working with adults it takes years for the Gospel to thoroughly shape a life! If you are listening and obeying God, take heart that God will do what is good in his own eyes and in his own time.  God stood by Samuel throughout his life and he promises to stand with us as well.

What does God want of me? 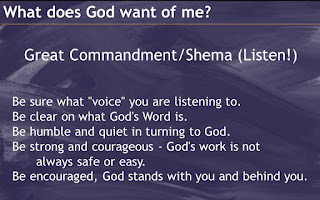 You all know the Great Commandment: “And you shall love the Lord your God with all your heart, soul, mind, and strength; and you shall love you neighbor as yourself.”  Jesus said that this commandment captured the heart of God’s desire for our lives.  It comes from the Hebrew Shema, a core teaching that they passed on from generation to generation.  The Shema begins with these words: “Hear (listen!) O Israel, the Lord your God is one!”

First, we must hear, then we must obey.  This is what it means to listen to God.  And God has something for each of us to do.

Be sure what “voice” you are listening to.

Be clear on what God’s Word is.

Be humble and quiet in turning to God.

Be strong and courageous – God’s work is not always safe or easy.

Be encouraged, God stands with you and behind you.

Previous
Here is Moses
Next
Here I Am Testimonies