When we started the “Here I Am” series a few weeks ago I talked about two aspects of that statement. One was understanding through the scripture what it means for us to say that, to be listening, available, and ready to God for where God would lead us. The other aspect was learning more about who God is as the one we respond to. In the story of Peter and Jesus, we encounter God through Jesus and He is forgiving and loving, still desiring for Peter to be a part of His work. In the story of Abraham we encounter the God who provides, not just for Abraham in the moment, but for all humanity through the sacrifice of Jesus Christ in our place. In the story of Jacob we encounter God who is merciful, despite the deceit of the scoundrel, Jacob.

Today we look at Moses and we will look at both those aspects – how Moses responds and who God reveals Himself to be. I want to trace four statements through this story: Moses saying “Here I am,” God describing Himself, Moses asking “Who am I?” to do this thing God asked, and then God’s ultimate answer, the Divine “Here I AM.” My hope is that you will learn more about God and yourself, and become better equipped to listen, become more willing to be available, and become ready to go in participating in what God is doing. 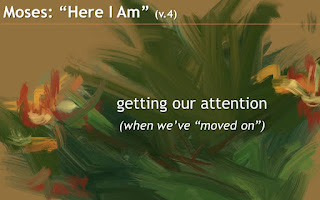 Verses 1-4 describe God getting Moses attention: Angel of the Lord (which turns out to be God Himself), burning bush that won’t burn up, and calling Moses name out loud. Moses is intrigued by the phenomenon of the burning bush. When he hears his name he answers, “Here I am.” (v.4)

Moses had grown up in Egypt, an Israelite raised by the Pharaoh’s daughter in the house of Pharaoh. But then as a young man he saw an Egyptian beating a Hebrew man and he fought and killed the Egyptian. He had fled for his life and now, in middle-age he has married a Midianite woman and is tending the flocks of her father, his father-in-law, Jethro.

Moses has moved on from his roots and his calling. He was clearly a special baby, spared by the Lord when the Pharaoh at that time was killing Hebrew babies. God had blessed him with an education, support, and protection of growing up in Pharaoh’s household, but he had fled from all that. Did he ever think about his people, enslaved and suffering in Egypt? I don’t know. But he was listening when God called His name. We’ll see if he was available and ready to go…

Pausing to consider Moses at this stage I am reminded again of Peter where we considered him a few weeks ago. He had followed Jesus as an enthusiastic disciple, but had failed Jesus significantly by denying him the night of Jesus’ arrest. When we find him at the end of John, he also seems to have moved on and left that life of discipleship behind. He’s back in his boat, fishing like before Jesus found him.

Can you relate? Was there a time when God was more real or you were more actively serving and following Him? I realize you are here this morning, but are there ways you feel like you have moved on from God? Did you make a mistake? Did God disappoint you? Did people disappoint you? This is one of the powerful things about this story. God still calls our name: “Robert, Robert.” How will we respond? Will we say, “Here I am?” Are we listening? 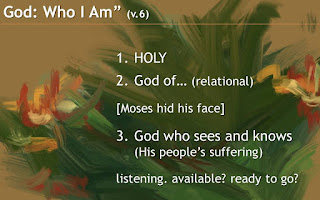 Now in previous stories we have had to look for and characterize what God is like, but in verses 5-10, God does a pretty amazing job of identifying Who He is and what He has done. In effect, He is introducing Himself to Moses and saying, “This is Who I am.”

First, God is HOLY. He tells Moses to not come too close, to take off his sandals, because even the ground around God’s presence is holy. Holy means set apart for a special purpose. Clearly, that’s going on with the burning bush. But the bush and ground are holy because ultimately God is holy and God is there in the midst of the burning bush.

At this point, Moses hid his face, for he was afraid to look at God. (v.6b) I guess God has effectively introduced Himself at this point! But, God goes on, thirdly, to describe how He is now going to relate to Moses and the people of Israel. God tells Moses that he has “seen the affliction of My people who are in Egypt.” God has heard their cry and knows their sufferings. (v.7) And God is going to deliver them and bring them to the land “flowing with milk and honey.” That is the Promised Land. In fact, the God who was faithful to Abraham, rescuer to Isaac, and merciful to Jacob is going to be all those things again now with the enslaved people of Israel.

So God has something for Moses to do. God is at work and wants Moses to be a part of that. Is Moses available? Is he ready to go?

I believe God is still at work, being faithful, saving people, and showing mercy. And I believe God wants each of you to be a part of His work. So, same questions: are YOU available? are YOU ready to go? 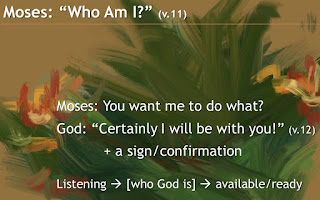 Moses was not. He hears about going to Pharaoh and bringing his people out of slavery and he asks God, “Who am I (to do that)?!” (v.11)

Isn’t that just where we so often get stuck? “God, you want me to do what?!” …share my faith with a friend… risk involvement in another person’s mess to help them out… confront racism when we see it rather than turn away or remain silent… volunteer with the youth… go on a mission trip… see my regular life as a mission trip…

Listening to God is one thing… and that takes some intention and willingness to hear. Are we afraid of what God will say? Absolutely! But listen to God’s response to Moses: Certainly I will be with you! (v.12) On top of that, God offered a sign… not in advance of the mission, but as confirmation of the mission afterwards: “When you have brought the people out of Egypt, you shall worship God at this mountain.” (v.12)

That has been my experience in so many cases. I don’t get a ‘sign’ in advance of following where God is leading (and He doesn’t promise one afterwards), but so often in hindsight I can see confirmation of the Lord’s presence and direction.

What moves us from ‘listening’ to “available and ready to go?” I think one thing is realizing that what God is going to accomplish isn’t up to us or our skill or strength. It’s easy to get stuck on “who am I to do this?” but what we need to see instead is who God is. 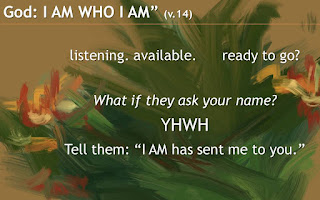 In verses 13-14, Moses moves a little in the right direction. He is ‘available’ if not yet ‘ready to go.’ He tells God he will go to the people of Israel to tell them that the God of their fathers has sent him. And then he asks an interesting question: “They may ask your name… what shall I say to them?”

Now God has already identified Himself. Remember that from a few verses ago? God is holy. God is the God of Abraham, Isaac, and Jacob. And God sees and hears His people’s suffering and is going to act. That’s a lot of introduction.

Maybe Moses is just hesitating. But maybe he thinks of his people… perhaps the memory of Abraham, Isaac, and Jacob’s God has weakened. They have been in slavery for 400 years! And the Egyptians had that whole range of Gods: Ra, Anubis, and the like. It’s entirely possible the thread of God and His promise to Abraham to bless, multiply, and provide a home had passed into story and distant memory. It’s a fair question and perhaps a helpful one as well.

God’s response is significant. This is God’s “Here I AM!” and the explanation of God’s name is so unusual and notable. It is hard to translate. Perhaps you’ve heard the possible translations there in verse 14. The name God gives can be translated “I am who I am” but also “I will be who I will be.” God is not only naming Himself, but describing His own ability to determine His future. No one created God or determines who or what God will do or be. God IS. Up to this point Moses had been calling God ‘Elohim’ – the general word for God. Even named as the God of Abraham, it was just that, “the God who spoke to Abraham.” But this is personal, and foundational, and claiming to be first and last and all in all.

When Moses wrote it out, the Name was four Hebrew letters: YHWH. Even to this day, Jewish people do not speak or write the name because it is holy. In your Bible, you can know it is this name (YHWH) whenever you see LORD in all-caps. In fact, that became the practice when referring to the holy Name… Jewish people would substitute the word Adonai or “Lord.” Even the name Jehovah, used in English-speaking settings, are a nod in this direction, verbalizing YHWH not with the vowels it would normally take, but using the vowels from Adonai to speak the word. You’ll sometimes see this same kind of thing in English when Jewish people will write G-d instead of writing ‘God.’ Though sometimes all of that can move into superstitious practice, it is meant to recognize the holiness of God’s name. Christians believe it is acceptable to pronounce YHWH, “Yahweh,” but I would still do so with ultimate reverence and seriousness for all that it means and represents.

And having declared “Here I AM” to Moses, God says to tell the sons of Israel, “I AM has sent me to you.” 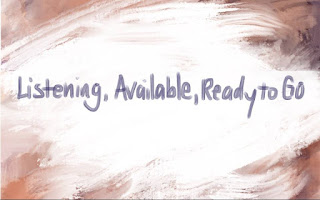 Listen: is God speaking to you through His Word or Spirit? I believe God continues to speak to us today, not (usually) verbally, but nudging our spirit and through the words of Scripture. Is He calling your name?

Available: Are you available to God? It is easy to shy away from mission or ministry that seems daunting. Often we don’t feel qualified to do it. (And truthfully, we AREN’T qualified to do what only God can do.) But God invites us to be a part of it, to trust, obey, and follow. And if we can remember who it is that is calling us – if we can catch a glimpse of just how holy and powerful God is to accomplish His will – it can help move us from ‘available’ to ‘ready to go.’

Previous
Here is Jacob
Next
Here is Samuel