Is it okay to do something wrong – sinful – in order to accomplish God’s will? Does a good and godly end justify means that are less than godly? What happens to God’s plan when we sin? These are all questions raised in today’s story. We are continuing the “Here I Am” series, seeking to be listening, available, and ready to go for whatever God may ask of us individually and as a church.

I’ll flat out tell you this is a messed-up story. In fact, one of the first things I do in preparing for a sermon is to go into my files and see what I’ve preached or taught on it before. I realized I have never taught or preached this passage before. I don’t remember consciously avoiding it, but I’m sure I looked at it and thought, “Yeah, I don’t know what to do with all that mess,” and moved on.

So why now? Well, when I chose the eight or so passages for this series, they came from searching for the phrase, “Here am I.” This was one of the passages that turned up so I put it on the list. Joke’s on me! It appears twice in this passage, but neither time from Jacob! But, I trust that God put it on my radar for a reason, so we are going to dig in. And, having looked at it now, it’s still a mess, but I think there are some profound things to learn from Jacob’s story about how we make ourselves available for God. 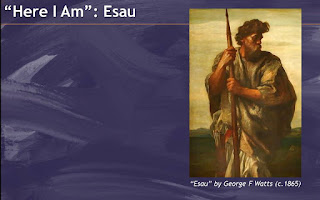 The first time “Here I am” appears in our story is on the lips of Esau. Isaac, the son of Abraham, has grown old and wants to pass on the family blessing before he dies. This blessing is no small thing. It can only be given once and was understood to be a legal as well as spiritual transaction. The father would bestow the family mantle and God’s blessing on the son. And traditionally that blessing went to the eldest son. So Isaac summoned Esau and greeted him, “My son.” To this Esau responded, “Here I am” – not just identification, but “listening, available, and ready to go” for what his father wished. Esau was the first born (of twins) and was a hunter. And so Isaac asked Esau to hunt his favorite game, prepare it, and return “so that my soul might bless you before I die.” 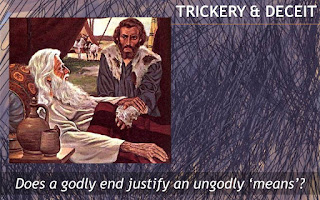 Straightforward enough so far… but mother Rebekah hears this and goes into action. She tells Jacob to go get an animal from the flock, which she will cook and prepare. She wants Jacob to pose as Esau with old, blind Isaac, and get the blessing. Jacob realizes that may not be enough and points out that he and Esau are very different and different-looking twins. Esau is very hairy and Jacob is not. Jacob is worried, not that this is wrong, but that he will be caught! But Rebekah responds in two ways. She tells Jacob to obey her, that she will take any curse or fallout from this upon herself, and in some of the verses I skipped over for length, she dresses him in Esau’s clothes and puts the hide of a furry animal on his arms and neck so that Isaac would be fooled. Later, Isaac will speak the second “Here I am” as he is thoroughly tricked by Jacob’s deception.

Jacob’s actions are not behavior that God would endorse or command in any way. And while that may seem like the messed up part, the Bible is full of people who do NOT do what God wants. Don’t ever make the mistake of reading the Bible and thinking that every character or behavior you find there is an example to be followed. Sometimes the character or behavior is there precisely to show what NOT to do. And I believe this is one of those cases. At this point I’m ready to declare Jacob and Rebekah off the rails entirely. And this is not Jacob’s first time; earlier he tricked Esau out of his ‘birthright’ – the right of the firstborn to inherit property and blessing. So maybe you want to say this is just him claiming that. But that’s just trickery on top of trickery!

Does a Godly End Justify an Ungodly Means? 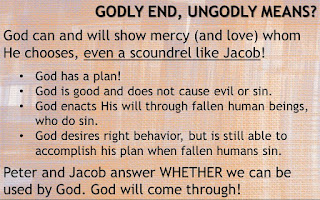 God told Rebecca before the children were born that the older would serve the younger. That’s back in Genesis 25, verse 23. Later God would say through the prophet Malachi (1:2) that He “loved Jacob” and in the New Testament that would be quoted in Romans 9 as a demonstration of God’s right to choose to show mercy on whom He will – and here’s one of the main takeaways – even on a scoundrel like Jacob.

So where does that leave us with what’s going on? It’s confusing, but I want to spell it out, because it’s a glorious truth.

God has a plan!
God is good and does not cause evil or sin.
God enacts His will through fallen human beings, who do sin.
God desires right behavior, but is still able to accomplish his plan when fallen humans sin.

With Peter, we’ve already heard Jesus speak to the concern that our mistakes disqualify us from following and being used by God. With Peter and Jacob, the question of WHETHER we can be used by God has been answered.

With Jacob, we can realize that we don’t need to hold back from saying “Here I am” to God because we might mess God’s plans up. Now that is a different thing than choosing to make our own way to what we think is God’s plan by any means necessary. God does call us to holy and right behavior. So being intentionally deceitful or sinful? The Apostle Paul would say, “May it never be!” But saying yes to God – listening, available, ready to go – despite weaknesses, fears, or the possibility of messing up? God says, “Come on; it’s on me to come through, and I will!”

Jesus: a Godly Contrast to Jacob

Now we are still left with whether Jacob is a role-model, and I would clearly say that he is NOT. But I think the point is not to look at Jacob, but to look at God. Jacob’s life was marked by struggling against and with God, but God always came through. Almost every time Jacob is mentioned in scripture after his life in Genesis, it is in the phrase “the God of Jacob.” In fact, you might make a case – since later in scripture God is often called the “God of Abraham, Isaac, and Jacob” – that qualities of God are highlighted in each patriarch’s story. The God of Abraham is Faithful in keeping His promises. The God of Isaac is the God who Provides and Saves. And the God of Jacob is Merciful and Powerful.

I want to end with one other contrast to Jacob as we think about HOW we say “Here I Am” to God. Jacob’s name meant “grasper” or “striver.” He was named that because when he and his twin, Esau, were born he was holding on to Esau’s heel. But his name certainly proved accurate as he spent so much of his life striving after what Esau had and grasping for all he could get for himself. 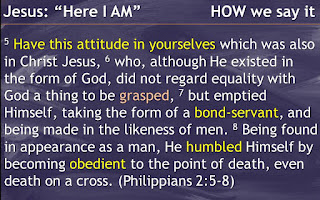 There was another who said “Here I Am” to God in a way that we can and should emulate. And, of course, that was Jesus. But when I was looking at Jacob’s actions and the meaning of his name I thought of a passage in the New Testament that not only offers a contrast to grasping Jacob, but exhorts us HOW to say “Here I am” to God. Listen to Philippians 2:5-8…

5 Have this attitude in yourselves which was also in Christ Jesus, 6 who, although He existed in the form of God, did not regard equality with God a thing to be grasped, 7 but emptied Himself, taking the form of a bond-servant, and being made in the likeness of men. 8 Being found in appearance as a man, He humbled Himself by becoming obedient to the point of death, even death on a cross.

How do we say “Here I am?” How shall we be listening, available, and ready to go? It is in humility, in service to God, and in obedience to God’s will. When you look at Jacob, look to God, who is merciful and powerful to accomplish His will. When you say “Here I am” to God, look to Jesus as our example to follow. Amen!

Previous
Here is Abraham
Next
Here is Moses