“I forgive you.” Have you ever heard those words spoken truly and purely? You’ve messed up, hurt someone, done something wrong. And that person has not responded with retribution or passive-aggressive payback, but has moved toward you in love and offered a second chance and a clean slate?

“And I want you to be a part of my life.” Most of us would settle for the release that comes with forgiveness. “Whew; that’s over.” But wiping the slate clean can leave one feeling alone at the bottom of a new mountain to climb. But what about when forgiveness is rooted in a desire for restoration and healing and relationship? Can you even imagine? How would you respond to that? 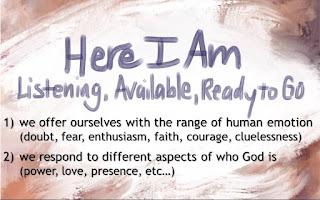 That’s what Jesus offered Peter in today’s text. And I chose this passage to begin a new series entitled, “Here I Am.” Over the next eight weeks or so I want to look with you at a number of situations in the Bible where people responded to God by saying “Here I Am.” And what I think we’ll see is two-fold: 1) that people offer themselves to God with the full range of human emotions… doubt, fear, enthusiasm, faith, courage, and cluelessness; and 2) people respond to different aspects of who God is… some to God’s power, some to God’s love, some to God’s presence. This is not a one-size-fits-all prescription for serving God, but one that is as varied as humanity and as rich and deep as the character of God.

My hope is that we will encounter God in each week’s text and service and that we will become listening, available, and ready to go wherever God might lead us individually and together. So let’s dig in! 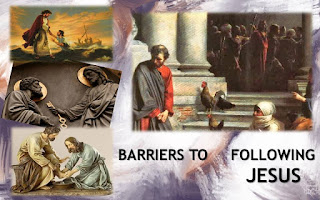 Over and over again Jesus invited people to come and see, come and check out his teaching, his life, his work. Over and over again Jesus invited people to believe and to follow. By ‘follow’ I mean serving Jesus with your life: priorities, commitments, time, energy, purpose. Following is what happens when we listen, make ourselves available, and are ready to go where God leads. But whether you are hearing that invitation for the first time or you’ve heard it many times before, one of the barriers to saying “Here I Am” is that we’ve messed up. Whether we’ve said it out loud, we think, “God wouldn’t want to use me; there are other, better people He’d want to use.”

Peter had been a super-star disciple. He had clearly confessed Jesus as “the Christ, the Son of the Living God” and on whose testimony Jesus declared that he would build the Church. He asked Jesus if he could come out and walk on the water to him. He tried to banish demons and heal people. He was all heart and effort and faith. He fiercely refused to let Jesus wash his feet, then volunteered for a full bath when he realized Jesus was making a point. And he’s the one who said he’d never ever desert Jesus.

And he did. In the hours of the night after Jesus had been arrested, he stayed close to see what was going on, but when he was recognized and questioned by a young girl and then others, he loudly denied knowing Jesus, finally swearing that he did not know the man. Then he ran away, not even present at the crucifixion of his Lord and friend. If you’ve ever failed someone in that way, you know how discouraging it can be and how easy to just turn away altogether. In relation to God, you may know what it is like to go back to our “old life of fishing,” doubtful that God has any useful purpose left for you.

Depth of Mercy, Depth of Love 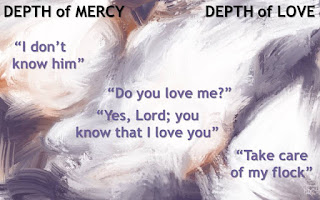 Three times Jesus asked Peter, “Do you love me?”

Three times Peter answered, “Yes, Lord; you know that I love you.”

Three opportunities to counter his denials and re-affirm his love for Jesus.

Three times, in effect, Jesus said, “I love and trust you, and I forgive you.”

It was just what Peter needed and it wasn’t a gimmick or a ritual. It was genuine forgiveness. It was genuine grace – unexpected, undeserved, and more than Peter could ask or imagine. And that was not all.

In that invitation to “take care of my flock” Jesus not only implicitly forgave Peter, but also said, “I still want you as a follower and disciple.” Jesus still had work for Peter to do. He was still saying, “Follow me.” Forgiveness didn’t just promote the fallen Peter to a second-class version of a disciple who now had to sit on the bench while other less-tarnished disciples were in on the action. Jesus forgave Peter and called him freshly into service as a disciple.

In a few minutes we will sing about this “depth of mercy” – that reaches beyond our expectations to forgive, heal, and call us forth.

Do You Love Me? 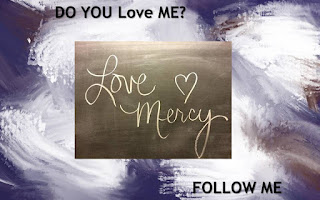 What I hope you hear as Good News today is that even as Jesus had not given up on Peter, neither has God given up on you. Even if you have failed and fallen, even if you have doubted and grown distant from God, even if it has been months and months or years and years, God still loves you, offers extravagant forgiveness and grace through Jesus, and says to you, “Follow me!”

I pray that God will open your ears to hear this, especially if you feel like God has given up or isn’t interested in you.

In the coming weeks we will encounter God through the eyes of different people in scripture. For some, God will be all power and might, and they fall to their knees before that power. For others, God draws near and speaks quietly and they have to listen carefully to distinguish His voice. Some will be asked to do something they don’t understand; others something they don’t want to do. In each case, we will see the importance of that posture of listening, available, ready to go.

Today, through the eyes of Peter we encounter God in Jesus Christ. He is full of love and mercy, forgiveness and a new start. More than that, God wants you to be a part of what He is doing. Today we are invited to respond to the love of God in Christ: Do you love me? Follow me.

Are you listening? Are you available? Are you ready to go?

Previous
Come and Worship
Next
Here is Abraham