Have you ever looked at a sunset, with the deep reds and oranges extending through layers and layers of clouds and thought, “What artistry!” Or my other favorite – looked at the rolling ranges of the Blue Ridge mountains cascading one after another into the hazy distance and thought, “How majestic!” When I see such breath-taking beauty in creation I can’t help but think of God and be awed by the world around us.

That is the thought captured in Psalm 19: “The heavens are telling of the glory of God… declaring the work of His hands.” That Psalm continues with vivid metaphors to explore the ways in which God’s creation glorifies its Maker. Then, in what may be a surprising turn for us as modern readers, the Psalm turns to the beauty and perfection of God’s Law… another life-giving and God-glorifying product of God’s person and power. Today we will look at these two gifts of God – creation and commandments – and then see how Jesus connects and embodies these two gifts. 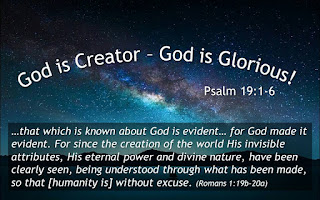 Psalm 19 declares that the heavens “speak” – they tell of the glory of God and declare the work of God’s hands. (v. 1) This kicks off a string of metaphors where the passing of days and nights also “pour forth speech” and “reveal knowledge.” (v. 2) What is this message? What is this knowledge? It is that GOD IS CREATOR and GOD IS GLORIOUS. And yet, these are not actual words and speech, and too many miss the majesty and glory of God all around us in Creation. Creation’s “voice is not heard.” (v. 3) Though the rising of the sun is like a groom coming out of his chamber to see the bride or an athlete racing to the finish line (v. 5), we sometimes still miss out on the message: GOD IS GREAT AND GLORIOUS!

Why do we miss it? Like any other thing going on around us, we can be distracted or lose focus. The Psalmist used very vivid imagery… who can imagine missing the groom or bride entering the marriage service or the athlete winning the big game or race? But I’ve seen folks lost in their text messages or conversations missing really significant things going on around them. I’ve been that person myself. Mission trips like the one I just returned from often serve to reset my focus; serving others can do the same even without leaving home. Or we focus on other priorities… or our self. But the Psalmist’s point is that this is not to be missed! Folks often complain that God is invisible and quiet, but the point the Psalmist is making is that God is showing Himself all around us all the time!

…that which is known about God is evident… for God made it evident. For since the creation of the world His invisible attributes, His eternal power and divine nature, have been clearly seen, being understood through what has been made, so that [humanity is] without excuse.

That is what theologians call God’s “general revelation” – it may not contain the specifics of salvation or forgiveness from sin, but it does proclaim – even “shout” – in its own way that THERE IS A GOD! And the reach of this general message is far further than the written word. It stretches and reaches “to the end of the world.” Bible translators are still laboring to get scripture translated into every tongue, but the sun rises and sets, the starry expanse displays to peoples in every distant part of the globe. The Psalmist uses these images and metaphors as if to ask, “How can you miss it?” Isn’t it evident all around you? 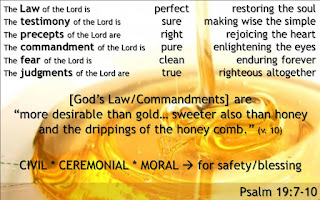 From there Psalm 19 shifts to talking about the “Law of the Lord.” This is not as abrupt a change as it might seem at first. The Psalm had been using communication metaphors like “speaking” and “telling” – how natural to shift into actual words given by God to reveal His purpose and will.  And after saying that some people do not “hear” the proclamation of Creation, it makes sense to make the point that God has ALSO revealed Himself through the literal spoken and written word. This is what theologians call “special revelation”: God’s written and revealed word, finding it’s complete expression in the teaching and person of Jesus Christ.

For the modern reader, what may be more surprising than the shift from Creation to Commandment is the affection and imagery with which the Psalmist talks about the Law of the Lord. There are six pairs of sayings  (remember the love of Hebrew poets for repetition?!) that line up with a description of the Law and its effect or blessing in our lives:

Then, after that, a startling claim about what can seem to us a dry, boring subject: [God’s Law/Commandments] are “more desirable than gold… sweeter also than honey and the drippings of the honey comb.” (v. 10) I remember tasting honey from the honeycomb from my aunts beehives as a child. There is nothing more sweet and natural than honey. And this is comparing that to God’s Law? To Leviticus and the Ten Commandments and all the rest? Really?!

Let me talk for a moment about God’s Law or Commandments. In Hebrew scripture – in our Old Testament – the Law served three main purposes. Some of it was civil law, instructing Israel how to govern itself as a nation. An example of that is Exodus 21:33-34 – “If a man opens a pit, or digs a pit and does not cover it over, and an ox or a donkey falls into it, the owner of the pit shall make restitution; he shall give money to its owner, and the dead animal shall become his.” While there is an underlying principle of fairness and restitution, this “case law” was the equivalent of our traffic laws or other national laws and is not meant to be replicated in other nations. It was specific to ancient Israel.

Some of the Law or Commandments had to do with the practice of religion and was ceremonial in nature. Examples include the various feasts and sacrifices as well as the kosher food laws and laws about mixing fabrics.

And some of the Law or Commandments was moral or ethical, describing God’s intent for things like sexual purity, the value of human life, or the treatment of family or neighbors. The best known examples are the Ten Commandments.

In every instance, the follower of God in ancient Israel understood that God’s Commandments were for safety and blessing. They weren’t for salvation, but for thriving and flourishing. They were given and spoken out of God’s love for His people, much like parents make rules for their children’s health and safety.

If you haven’t heard anything else, hear this: God speaks! God shows Himself! That is the claim of the first part of this Psalm. 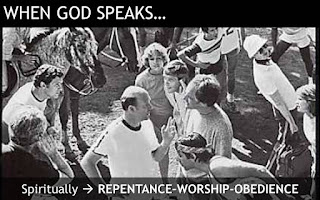 I remember a tv commercial from when I was young. It was for E.F. Hutton, which (I think) was a financial advising company back in the 80s. The commercials showed some crowded, loud room full of people and one person is asked about their finances. The person begins to respond, “My broker is E.F. Hutton….” As soon as that name is spoken, everyone in the room becomes immediately silent and listens in on what is about to be said.

That’s the kind of set up this Psalm gives. If the powerful and glorious God who made the world shows Himself and the compassionate and just God has spoken, how should we respond? Certainly we should pay attention! Certainly we should look and listen! What distraction or focus could be more important?

Another way of describing that attention and focus to God is as REPENTANCE, WORSHIP, and OBEDIENCE. Repentance is turning away from whatever else is capturing our attention and allegiance and turning toward God. Worship is offering our complete loyalty, devotion, and focus to God and what God says. And obedience is acting on what we see and hear from God.

I want to hit the pause button there and my challenge to you for this week will simply be to look and listen for God. This Psalm claims that God is showing Himself and speaking all around you all the time. God’s creation and God’s commandments are available to you. God is acting still in the world today. What do you see? What do you hear?

Next week we will finish the Psalm and see how the Psalmist (as human) responds to God. And we will take up that threefold response of repentance, worship, and obedience as our response to a living and holy God. Amen.

Previous
Light of the World
Next
Our Words and Thoughts