All fall we have been considering the invitation to “Come and See” Jesus. That’s how some of the first followers of Jesus met him and followed him. Either a relative or a friend or Jesus himself said, in effect, “Come check him out – what he says, what he does, what he’s all about.” And people started trusting him and following him. And that still happens today. One of the first examples of this happened long before Jesus was walking around teaching about the Kingdom of God. In fact, he had JUST been born. Some messengers from God shared the news and we heard the story of some of the very first to “come and see” what God was doing through Jesus. As we near the end of our series I want to use this Christmas story to invite you again to consider Jesus and how you would respond to him.

The Message and the Messenger(s)

This story starts with a message:

God’s saving and chosen one has come into the world.
And while the name wasn’t yet announced, it’s Jesus!
And this is good news; great news; joyful news

Now let’s be honest. Is that what you focused on when you heard this story? If I’m honest, I was picturing the angel that terrified a group of tough, rugged shepherds… the kind that wouldn’t flinch at a wolf or predator threatening their sheep. I pictured the whole army of angels that appeared shortly after the initial message. What in the world would that have looked like? So amazing! 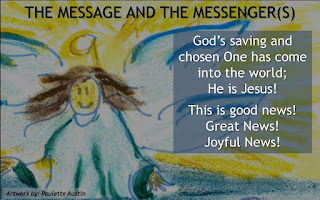 But I think that’s precisely where the disconnect happens when we are trying to apply this story. Ordinarily, God doesn’t speak through beings so powerful that they cause our knees to go weak with fear. Ordinarily God doesn’t speak out of burning bushes and whirlwinds. The place where you and I are most likely to hear God’s message is in very ordinary ways – reading of scripture, preaching and teaching at church, or in the godly counsel of others. Sometimes God nudges our spirit as we pray or listen, but in my experience, we have to be really quiet and paying attention for that. And if God has spoken more loudly or impressively, then good for you. But even then, that may be a once or twice in a lifetime kind of thing. What about all the rest of the time?

Here’s the thing: what’s really important is not the messenger, but the message. And the message of the angel and the angel-army is the same one that I speak week in and week out. It’s the same one packed into every book, chapter, and verse of scripture. And it’s the same one God’s Holy Spirit whispers to our spirits when we are really listening:

God’s saving and chosen one has come into the world; he is Jesus! This is good news; great news; joyful news! 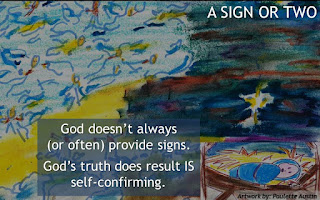 As if the visuals were not enough, the angel offers a “sign” to confirm the message: “you will find a baby wrapped in cloths and lying in a manger.” (and cue the angel-army praising God)

I’d offer a similar comment to what I said about the messenger. Signs are awesome! Confirmation is awesome! Wouldn’t life be so much easier if God would float a rainbow or peal of thunder in answer to our questions? “God, should I apply for the promotion at work?” (ka-boom!) …of course, then I’d be asking, “Was that a yes ka-boom or a no ka-boom?”

But more seriously, let me say two things about signs. First, they are not something God always or even often provides and should not be necessary, as helpful as they might be. Truth is enough! If a message is good and true or even hard and true, it stands on its own. And if you doubt, then by all means GO AND SEE! Check it out for yourself. But that’s not a sign; that’s confirmation.

And that’s the second thing I want to say: I believe God does provide confirmation because truth is self-confirming. If I tell you it’s raining outside and you think I am trustworthy, you may choose to prepare accordingly out of faith. But it is also fair to go see for yourself or take note of the truthfulness of my message once you are outside. That’s confirmation. And I think that’s at the heart of the invitation to come and see Jesus. And because I believe the message about Jesus is true, I have no hesitation and every reason to invite you to check him out and confirm the good message for yourself.

Don’t get caught in the trap of demanding a sign when confirmation is available. “God, heal my eyesight; then I’ll believe.” That’s not how God works. But try obeying Jesus’ teaching and walking in his footsteps and see what the effect is in your life. That confirmation that is available to you right now. 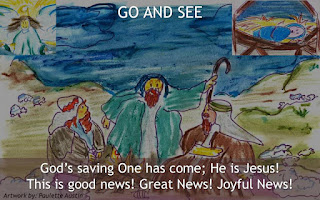 After the angels were gone, the shepherds said to each other: “Let us go straight and see.” (v.15) And indeed, they found Mary and Joseph and the baby in the manger. And, of course, that was the sign that had been offered to them – a baby wrapped in cloths and lying in a manger. But what they had to believe for themselves was not the sign, but the message about who this child would become – the Savior of the world. And the indication is… they did believe. And we know that because they didn’t just look and leave, but also acted on that encounter. Something had changed.

So all fall I have been inviting you through the scriptures to “come and see” Jesus. We’ve heard his teaching, considered his actions, and pondered the implications for life. But the shepherds didn’t come and say, “Cool, there’s a swaddled baby just like the angel said!” and then go home. They made known the statement which had been told them about this child. And that statement was the same message you are hearing today and have heard all throughout the year

God’s saving and chosen one has come into the world; he is Jesus!

The shepherds were changed. They not only went to confirm the message; they believed it and changed their behavior… they became message-bearers themselves. And that’s the application and next step for each of us hearing the timeless message this morning. Do we just keep showing up for the invitation again and again or do we believe and act on it? After Christmas we are going to look at one more story of people coming to see – that’s the Wise Men. But then in January we are going to look at stories of people who responded to God: some in faith, some with doubts, some with questions. But we’ll ask that next question: God, here I am… what do you want?

I hope you and your loved ones have a wonderful and special Christmas. Please join us tomorrow night for a special service of word and music around the Christmas story, and lighting of candles for the one who came as Light of the World. And on Christmas Day as you ponder the birth of Christ, ponder your response to the good, great, and joyful news that God’s saving and chosen one has come into the world. Amen!

Previous
The First Gospel
Next
The Christmas Story

June 26 Passing of the Peace