**Audio from the morning worship is not available; this audio is from the same (mostly) sermon preached in the evening at Sharon Towers Vespers.

What’s the biggest thing you can imagine that God could do for you? Ponder that while I re-read the verse Zach ended up with in the children’s message.

Now to Him who is able to do far more abundantly beyond all that we ask or think, according to the power that works within us, to Him be the glory in the church and in Christ Jesus to all generations forever and ever. (Ephesians 3:20-21) 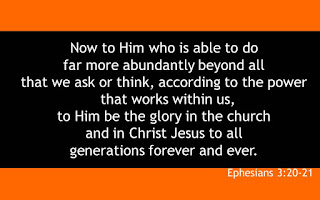 I pride myself on having a pretty good imagination, so this verse has always caught my attention. God is able to do more than I ask or think. And I believe that’s just what was going on in today’s story. Jesus claimed to have God-sized power and I want to look with you at that.

We are continuing in a series entitled “Life in Jesus’ Name” in which we are taking seriously Jesus’ admonition to “hold fast to my name.” In order to do that, we are looking at what Jesus said and did. Today’s text is especially significant because he did both: he did something extraordinary and then he taught and demonstrated the significance of it. Let’s look and pay close attention so we’ll know what we are holding fast to! 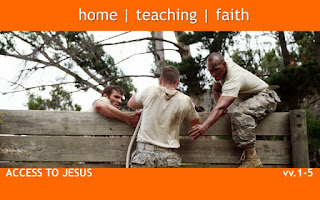 So the story opens. Now I need to say something that I feel like I say pretty frequently. There’s something here I never noticed before. I say that because I hope it’s encouraging to you that if I keep noticing new things every time I look at a Bible story, then there are still things for you to learn as well. That’s why I still go to Sunday school. That’s why I keep reading and studying the same stories over and over. There’s always more to discover!

So what is it this time? It’s in the first verse. Jesus had come back to Capernaum and it was heard that HE WAS AT HOME. Did you know that? He had a house in Capernaum! Now some scholars think it was Peter’s house and Jesus was just staying there. Others think it was his. Either way, I always picture Jesus wandering around with the band of disciples, maybe staying for a short time with friends like Mary, Martha, and Lazarus. But this says “he was at home.” Any deep spiritual meaning to that? I don’t think so. But it is new information to me! Jesus had a home in Capernaum and was rooted, at least for a time, in that community. He had neighbors. He interacted on the waterfront. He went to the synagogue. He had a home and people knew where it was.

And crowds came to hear him. They filled the house to overflowing! The word had gotten out that Jesus was healing people. But interestingly on this particular occasion the text says that the house was filled to overflowing and Jesu was “speaking the word to them.” (v.2) Another new thing for me – I always assumed it was for healing but it doesn’t say that. In fact, I checked this story in Matthew and Luke as well. In each Jesus is TEACHING and they just try to get their friend near to Jesus. ) And four men made an opening in the roof in order that a fifth man who could not walk might be lowered down near Jesus.

And here’s the verse on which this whole story hinges: “And Jesus, seeing their faith, said to the paralytic, ‘Son, your sins are forgiven.’” (v.5) There are two important things in that verse. One is a definition of faith. Faith is trusting, believing, acting; it is visible to Jesus and he notices it. And it is some way connected to what he does next. He could have just kept teaching. He could have healed the man, which is perhaps what many assumed he would do. But he says, “Your sins are forgiven.”

Have you ever given someone a present and they open it excitedly and have that awkward pause and then say “thank you,” but it’s clear they don’t know what it is they are looking at? That’s what I imagine here: not a wild, exuberant thank you for the forgiveness of sin; but a puzzled look as to what exactly this ‘gift’ is. 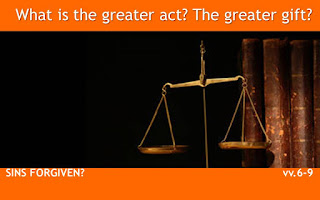 Here is where we, fortunately, have some religious leaders to ask the awkward questions for us. Now normally scribes and Pharisees are cast as the bad guys, and generally (as here) they are not pleased with Jesus and what he is teaching. But they are actually on to something really important here. While the four men, the one paralyzed man, and the others packed in the house may have been surprised and confused by Jesus’ response to the situation, the scribes were right on target. “Why does this man speak that way? He is blaspheming; who can forgive sins but God alone?” (vv.6-7)

YES! That’s exactly the import of what is going on here. Let me say this once and we’ll circle back a few more times. Jesus was revealing himself here, not as a great teacher or even some kind of healer; but as GOD. Who indeed can forgive sin? Jesus realizes what is on their mind and presses in with this question: “Which is easier to say… ‘Your sins are forgiven’; or to say, ‘Get up, and pick up your pallet and walk.’?” (v.9)

I’ll be honest: most days I’d ask for the healing. There are things with my physical body that aren’t the way I would like. I really struggle with vision… I haven’t seen clearly in about 15 years and I’ve tried just about every solution out there. I know some of you deal with things far more challenging. “Forgive us our sins” most days is just a line in a prayer… if I’m being honest.

But the scribes had it right. If we really grasped what “your sins are forgiven” means, we’d give anything to get it. It’s the “pearl of great price” – a story Jesus told about a man who sold everything he had in order to buy this one pearl that was the Kingdom of Heaven. I’ve heard more than one person describe something they lost or gave up when they came to trust God, and they say “it was worth it.” “Your sins are forgiven” is being made right with God. It is being made whole and complete. It is something we cannot do for ourselves. It is well worth trading everything to buy, except we can’t buy it or trade for it. It is the gift of God. The scribes had it right; they just could not imagine this man from Nazareth in any way being empowered to give what he offered. But their shock is a testimony and reminder to us of what is of greatest value. 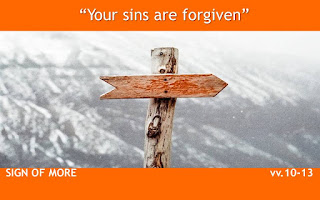 And this is when the healing happens – and Jesus explains why he heals the man. It’s in v.10… “so that you may know that the Son of Man has authority on earth to forgive sins.” The healing was a sign of the authority and power had to forgive sin, to restore fellowship and rightness with God.

Doesn’t Jesus care about our physical bodies? Yes, of course! What he did here does not diminish his compassion or healing in any way. If it feels like it does, it’s because we struggle to grasp “your sins are forgiven.”

Should we pray for healing? Yes, I believe we should. But we should pray even more for healing of the soul. I think about this all the time with my children. They have the normal stresses and challenges of people their age. We often pray for this or that test, for their relationships, for their emotional well-being, for friends, for safe travel. By all means, pray for it all! But the thing I pray for the most is that they will know God. They will know and accept and receive God’s “your sins are forgiven.” I pray that even if they sometimes look at that and give me a “what exactly is this?” look.

This story is interesting to us, but I think for the wrong reasons. We are fascinated by the persistence and ingenuity of the friends who came through the roof. We love to read of Jesus healing people because we hope that God might still do something like that today. We see Jesus not frustrated by the scribes, but doing some kind of slam dunk on their complaints. But we read right past the main thing, the biggest thing, and the thing that God does offer to us through Jesus: “Your sins are forgiven.”

I began with two verses from Ephesians. I want to end by reading them again with a little bit more of the context. It is a prayer from the Apostle Paul. I hear in it a vision for what “your sins are forgiven” means and a desire for those to whom he writes to know the full measure of that gift of God.

14 For this reason I bow my knees before the Father, 15 from whom every family in heaven and on earth derives its name, 16 that He would grant you, according to the riches of His glory, to be strengthened with power through His Spirit in the inner man, 17 so that Christ may dwell in your hearts through faith; and that you, being rooted and grounded in love, 18 may be able to comprehend with all the saints what is the breadth and length and height and depth, 19 and to know the love of Christ which surpasses knowledge, that you may be filled up to all the fullness of God. 20 Now to Him who is able to do far more abundantly beyond all that we ask or think, according to the power that works within us, 21 to Him be the glory in the church and in Christ Jesus to all generations forever and ever. Amen. (Ephesians 3:14-21)

Previous
Cleansed and Welcomed
Next
Hanging with the Wrong Crowd