We pick back up today with the “Come and See” series, with a chapter in John that holds special bearing for our church. It is the passage in which Jesus names himself as “Good Shepherd.” And indeed, this chapter is full of sheep and shepherd imagery, with Jesus drawing comparisons to a number of aspects of working with sheep. Accordingly, I have named the sermon “Everything Sheepish.” What I hope this text will offer you today is several pictures of who Jesus is and how he shepherds us as God’s people. 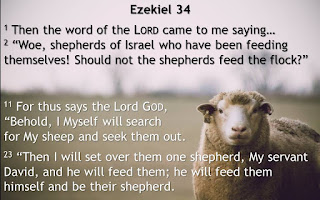 Here’s one important background to this text. In general, we all can appreciate shepherd imagery to some extent. Even we who live in the U.S. in 2018 and have never seen a sheep, pasture, or shepherd, can grasp quite a bit of the metaphor. Even we love the 23rd Psalm with its statement, “The Lord is my Shepherd; I shall not want.” We can read the words and understand. Shepherds protect their sheep; they lead and guide their sheep. They provide for their sheep. We get it. But think how much more all that imagery would mean to someone who lived in an agrarian or nomadic setting where sheep and goats and such were part of everyday life. It would be an image and metaphor that really came to life.

Well one of the key biblical passages to understanding John 10 comes from the prophets to Israel. More than one spoke and wrote about the leaders of Israel as shepherds of Israel. And more than one bemoaned the poor leadership and poor shepherding some of those leaders offered God’s people. Ezekiel, in particular, wrote in Ezekiel 34 that God’s people were being deceived and betrayed, but one day God would come and rescue His people:

Behold, I myself will search for my sheep and seek them out.” (v.11) And God promised a Great Shepherd to care for them: “I will set over them one shepherd and he will feed them himself and be their shepherd.” (v.23)

In John 10, Jesus is not just using random shepherd imagery, as positive as that might have been. He is CLAIMING something. He uses several “I AM” statements in which he makes claims to be that promised Good Shepherd, to be the Messiah of God. So, as we look at these teachings on everything sheepish, I’d like to divide the text up into four distinct sections. These will be an initial metaphor, two follow-up elaborations, and a final claim about being the Messiah of God.

METAPHOR: He Who Enters by the Door is a Shepherd of the Sheep (vv.1-5) 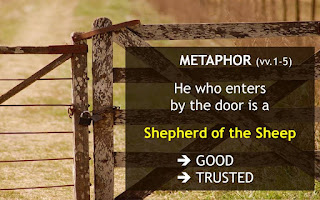 In verses 1-5 Jesus offers a metaphor to explain who he is, why he has come, and what the results of that ministry will be. Yet in verse six we read that “they did not understand.” So much like his conversation with Nicodemus about being born again, Jesus then revisits and elaborates on his initial metaphor to help them understand. Let’s first look at this first metaphor and then we’ll look at his elaborations.

He begins speaking in the 3rd person: the one who does not enter the sheepfold by the door is a thief and robber. This person is contrasted with the one who does enter by the door; that’s the shepherd. And his sheep know him. They know his voice and they follow him. They don’t do this with strangers; only with their shepherd. So there are two things to know about a shepherd. He is GOOD (not a thief or robber) and he is TRUSTED (sheep know and follow).

No we are not given specific time, place, or audience clues here. He may still be speaking before the Pharisees who had asked at the end of John 9 whether he was claiming they were spiritually blind when he taught about that topic. Or he may have moved on. But at the end of this teaching (after our reading today) we can see that a “division occurred among the Jews.” (v.19) So likely there were followers, seekers, and some of the religious leadership present. The latter may have felt especially on the hot seat since Ezekiel’s preaching on bad shepherds singled out leaders similar to them among God’s people in a previous generation.

And Jesus might have stopped here except that the people “did not understand.” (v.6). So as he did with Nicodemus and others, Jesus takes a more detailed pass through the same teaching, offering two additional elaborations. 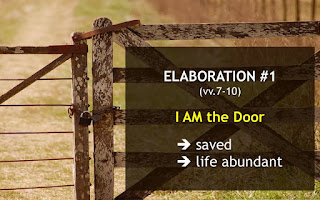 Starting in verse 7, Jesus switches from 3rd person to 1st person. No longer is it “the one who enters by the gate is the shepherd.” Now it’s “Truly, truly, I say to you, I AM the Door of the Sheep.” (v.7) And in a bit, “I AM the Good Shepherd.” (v.11) He is claiming to be the Good and Trusted Shepherd. He is the type of leader Ezekiel promised God would send. He is one like David, the shepherd-king.

I AM the Door of the sheep.”

He actually claims a bit more here than being the GOOD (non-thieving) Shepherd; he is the Door itself. He is the way to get to Himself! And he doesn’t stay all the way in the metaphor:

I am the door; if anyone enters through me, he will be saved, and will go in and out and find pasture.” (v.9)

He’s not just talking about food and safety, but being saved. He clarifies that unlike the thief who comes to steal and kill and destroy,

We’re not talking about sheep any more, are we Jesus?

Elsewhere Jesus will claim to be the WAY to God. That’s a bit of what he means here by saying he is the Door. It is through him that we come to him and to God the father. Other claims to save you, whether false Messiahs, empty promises of life and health, or flimsy assurances of future happiness, are like thieves, stealing away our hope and well-being. But he’s the real deal. He’s the Door and he is GOOD. 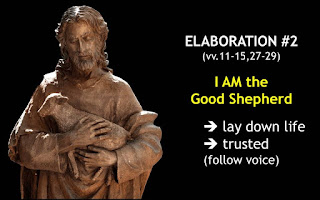 Then, in verses 11-15, Jesus elaborates on being the TRUSTED Shepherd. He still speaks of himself, saying that he will lay down his life for the sheep. Someone who is simply a hired hand will reach their limit and flee in the face of danger or death, but the Shepherd can be trusted to care for his sheep to the end. It was no stretch to say that a shepherd risked his life to protect his flock. A shepherd would face down a lion or other wild beast to protect the flock. And Jesus makes it clear (out of the metaphor) that he is willing to put his life on the line for those who trust and follow him.

A little later in the chapter (v. 27) he will return to his opening statements about the sheep knowing and following their shepherd’s voice. But he’s clearly no longer just talking about earthly sheep and shepherds. There is more on the line; this is reality.

My sheep hear my voice, and I know them, and they follow me; and I give eternal life to them, and they will never perish; and no one will snatch them out of my hand.” (vv.27-28)

He claims this to be true because God the Father has given them into his care and no one can snatch them out of God’s hand. (v.29)

MESSIANIC CLAIM: I and the Father are One (v.30) 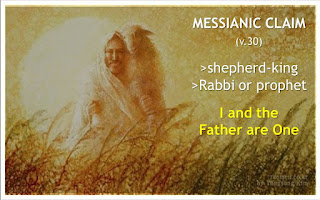 But then he comes to what is, perhaps, the greatest claim of all:

The very next verse, which we didn’t read, will give you some indication of the response. Verse 31 reads, “The Jews picked up stones to stone him.” Blasphemy! Unless, of course, it’s true!

Jesus really went beyond the Messianic claim. He was and is more than one like David, the shepherd-king. He is (or claims to be) one with God. That’s not a good translation: better “the Father and I are one… a single unit… one person.”

When I invite you to come and see Jesus, or when Jesus invites people to come and see… you may or may not believe, but do see and hear clearly his own self-understanding. He did not think of himself as simply a Rabbi. He did not simply point people toward God. He claimed to be the way to see and know God… the way TO God. And he did not claim to be a prophet or spokesperson for God, but claimed to BE God. “I and the Father are one.” What do you do with that? I hope you believe and follow! He is the Shepherd – the GOOD and TRUSTWORTHY Shepherd. Come and see; come and hear; come and follow. His sheep know his voice! Amen.

Previous
Stewardship, a Way of Life
Next
Deep Feelings