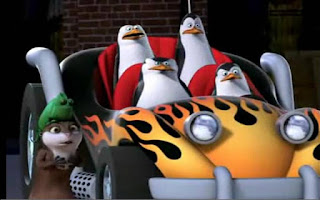 There is this guy driving down the road. He’s got 17 penguins in his car. This cop sees him, stops him, and says, “I don’t know what’s going on here. But you’ve got to take these penguins to the zoo.” The guy’s like, “OK.” The next day the guy is driving and he has the same 17 penguins in the car. The same cop pulls him over and says, “Look, man, I stopped you yesterday and I told you to take these penguins to the zoo.” The guy says, “I took them to the zoo. Today we’re going to the beach.” (Ezra Feinberg from the band Citay)

So, what am I doing? Is this a new fad in preaching… being a stand-up preacher? No, I began with a joke because a joke is a good template for understanding how a parable works and we are looking this week and the next two weeks at parables Jesus told around the dinner table. Last week we looked at the first verses of Luke 14. Jesus was invited to a dinner at the home of a prominent religious leader. And this was no ordinary dinner; it was packed with folks who were out to get Jesus – to trick him, trap him, and get him in trouble. The host was one of the Sanhedrin, one of the religious judicial court. The table was filled out with scribes, who were experts in the religious law, and Pharisees, members of a religious political group who wanted to make that religious law the law of the land. And then there was Jesus and one sick man. And in those opening verses Jesus faced the test of whether to help and heal the sick man on the Sabbath, with all those religious folks waiting to catch him doing something against the religious law.

He did heal the man and asked them a series of questions that silenced them. And before they knew it, he started telling parables, not meant to be funny, but with a similar form to a joke with a punch line. I want to talk briefly about how parables work, then look at this first one of three in verses 7-11, then at the punch line Jesus delivered through that parable. And maybe, if we pay attention, we’ll get the joke that’s not a joke, but a pointed Word from the Lord for us today. 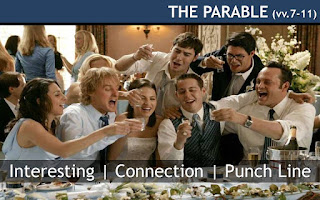 With the disclaimer that analyzing a joke can really kill it, what I want to do briefly is analyze what makes a joke a good one. I can think of at least three things (there may be more): it’s interesting, draws the audience in with points of connection, and then delivers an unexpected ending: the punch line. Let’s look at those three components.

Interesting – Any number of things can make a joke or a parable interesting. It may be about something unusual or even ridiculous (17 penguins in a car), it can be about something relevant (a wedding banquet), or it can even appear to be uninteresting (“Did you hear about those actuaries in the news?”) but quickly surprise the disinterested listener with a connection or punch line. Sorry, I don’t have a good joke about actuaries. But you have to be careful for the intro to not be so inaccessible to the listener that they don’t make it to the connection or punch line. I may have lost the average listener at ‘actuary’ (or they would have been stuck on “What’s an actuary?”) But the key is something that makes the audience want to pay attention while also not giving away the punch line. Jesus did this here by talking about a wedding banquet. For most people, a story that starts with “If you are invited to a wedding banquet…” makes you want to hear the rest of what’s coming.

Connection – And what makes a good joke (or parable) even better is if there is a point of personal connection with the audience, like if I had told my opening penguin joke at a gathering of police officers or if I told it to a youth advisor with a van packed full of middle schoolers. If the audience feels like this story has something to do with them it draws them in even more. Jesus did this masterfully in today’s text. He could have simply said what the scriptures taught about humility, using Hebrew scripture like Proverbs 25:6-7, which his hearers would have been very familiar with:

Or he could have told a parable with any kind of story line that tied into humility. But we read in verse 7 that “He noticed how [the invited guests] had been picking out the places of honor at the table.” Using what was happening right in front of him at the dinner table, he told a parable that would not only be interesting, but connect directly to his audience, their attitudes, and their actions right then and there.

Punch Line – In a joke the punch line happens when the story or expectation shifts. The listener has a kind of ‘aha’ moment which, in the case of a joke, is supposed to be funny or ridiculous or silly. But it’s unexpected. Even in the ridiculous scenario of 17 penguins in a car, we thought the driver had disobeyed the policeman. But he had taken the policeman’s instructions in a literal, but unexpected way. Sometimes jokes make you groan or belly laugh, but there’s that twist or punch line that delivers at the end. In a parable, there is often a twist or unexpected turn. In Jesus’ parable today, that unexpected moment is two-fold: there is a point about humility that they didn’t see coming AND because of the immediate connection to what is going on around the table it is a point TO THEM in particular. So let’s look some more at the point and the punch line of Jesus’ parable here.

Two unexpected things happen in Jesus’ parable for the listeners at that dinner. One is that the imaginary wedding feast didn’t go as it should. Invited guests did not show appropriate humility and the expected hospitality was disrupted. It would have been a great spectacle and shame to be escorted from the lead table to the back of the room because you inappropriately sought out the best seat. Even though there is a huge distance between our culture and that of Jesus, can you imagine if you went to a seated wedding reception and you decided to go sit at the head table with the bride and groom and their family and then were asked to leave? So part of what makes this story interesting is that the scenario is pretty unthinkable. Who would do that? What disrespect to the host! Any proper guest should ask the host where to be seated. That was true then as it is now.

I think verse 11 is the punch line, but it is in a “you had to be there” kind of way. Here’s how I can imagine it playing out in the listener’s heads: 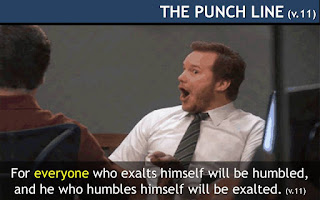 If I’m at that table I think: Right on, that guest was way out of line and got what was coming…. wait, he said EVERYONE… not just the wayward guest. Is he making some kind of point here about humility? That sounds a lot like the Psalm (138:6 “Though the Lord is exalted, yet He regards the lowly, but the proud He knows from afar.” referenced in James 4:6)… wait, we were all scrambling for a good seat when we got here… is he talking about ME?!?!

That punch line started happening at ‘everyone’ and unfolded by the end of the sentence when an interesting story suddenly pierced the heart of all those sitting in the room with Jesus. These were the scribes and teachers of the Law, all the folks who knew every verse and rule about pride and humility and could quote it. But their behavior had betrayed them. Those who put such a premium on literally doing good all the time by obeying the smallest parts of the Law had been caught and called out for breaking one of the most flagrant sins: pride.

And the beauty of the parable: Jesus hadn’t said, “You there, you are being prideful.” He could have delivered a teaching on pride and humility much like we heard this morning from James 4. But instead he just told a story and each one there heard themselves in it and were self-convicted. Perhaps some missed it, but I think that would have been hard to do. That’s what a parable does – if you really get it, it gets YOU!

A Parable for Us?

So in an ideal world, the way I’d love to preach this passage is to tell you a parable that interests you, connects to you, and provides that punch line where you find yourself in the story, thinking “I got it!” and the thing you got is God’s Word to you. If I could do that and the message be humility, then I’d be right on today’s text. But I couldn’t think of one. Plus, you have Jesus’ parable on humility to think about. So, I’ll tell you this one instead: 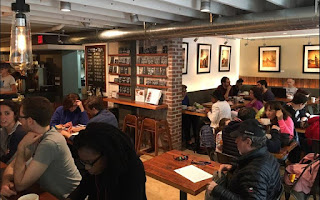 There was a grand opening of a new coffee shop in the neighborhood shopping center. This was an endeavor by a local family in a market flooded with Starbucks, Caribou, Dunkin’ Donuts, and many others. But they would make it homey and personable, the kind of place where you’d come in and stay a while. It would look and feel like your own den or family room, with comfortable furniture, quiet music, and friendly staff. The owners had great hopes and dreams for the place. They had the opening night and they invited their closest family and friends to come. And come they did! They filled the place and bought coffee and stayed and talked and enjoyed the furniture and the music. Other folks had heard about the opening and came to see what was going on. They waited in line and met the owner and bought the special blend made just for this occasion. And it was standing room only. For those guests and new customers, it was standing room only. All the family and friends were nestled down in the comfy chairs listening to the quiet music and enjoying conversation with each other. And after standing and looking around a bit, those other folks who weren’t family or friends slipped back out. Sometimes they stopped back in a few days later, but the family and friends, out of a sincere desire to support the couple, always filled the comfortable seats, and the other folks neither lingered nor stayed.

Now I’m not a great creator of parables. In fact, I think that’s my first. And everything in me wants to go back through that and preach it regular-like. But I’m going to just let that sit and trust the Holy Spirit to help it marinate. We have two more weeks of parables, so maybe I’ll come back to it next week and say a bit more. Amen.

June 26 Passing of the Peace