I’d like to introduce a new series today: “Life in Jesus’ Name.” Back in August when we were going through the letters to the church in Revelation, we looked at the letter to the church in Philadelphia. The charge to that church was to hold fast to God’s Word and to Jesus’ name. That was the Sunday I asked everyone to write down one verse of scripture that was significant to them. I also talked about what it would mean to hold fast to Jesus’ name, or to live “Life in Jesus’ Name.” It means that we live in obedience and service to God through Jesus. We do what Jesus would have us do. He taught a lot about loving neighbor, helping the least, and living as citizens of the Kingdom of God. That’s what we are going to focus on this Fall as we look at a number of scenes from Jesus’ life and ministry in the Gospels. We’ll hear a lot about neighbors and about the Kingdom of God. And the question will be, “How can I live life in Jesus’ name?” 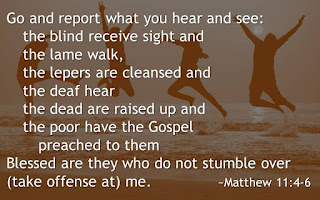 We’ve also looked at how Jesus announced his ministry by reading from the scroll of Isaiah in his hometown. You heard that passage as the Call to Worship today. I also want to put up a similar passage from the Gospel of Matthew because it frames what Jesus was about in his earthly ministry. It was his response when John the Baptist sent his followers to ask Jesus if he was indeed the Messiah. We’ll keep referring back to this during this series:

Go and report what you hear and see:
the Blind receive sight and the lame walk,
the lepers are cleansed and the deaf hear
the dead are raised up and the poor
have the Gospel preached to them
Blessed are they who do not
stumble over (take offense at) me.
~Matthew 11:4-6

Today we begin with a story from the Gospel of Mark of Jesus doing one of those very things. A person with leprosy comes to Jesus for healing and Jesus heals him. That seems very Jesus-y, right? And there’s also a strange part about keeping it a secret. At first pass most of us probably think, “I don’t have leprosy and I can’t heal people that do, so how am I supposed to live like Jesus here?” We’ll unpack all that a bit today and see what it has to do with us. But first, let me tell you about my dog, Buddy. 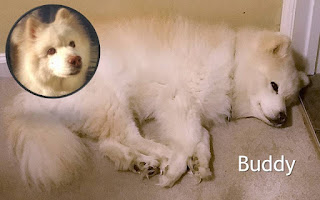 Some of you have met my dog, Buddy. If you haven’t, he’s a breed called a Spitz (sometimes also “American Eskimo Dog”). And the first thing you’ll notice is that he has really thick, white, fluffy fur. Children LOVE to pet him because he’s so soft and fluffy. People have variously compared him to a sheep, a polar bear, or the figurative “wolf in sheep’s clothing.” Here’s a picture of him lying down and one of him facing the camera.

One day I was home alone and it had rained and Buddy had gone out in the backyard for a long play. I had tried to get him to come in when the rain started, but sometimes he just needs some outdoor time. Well finally I heard his scratch at the back door to come back in and I opened the door to let him in. He was ready, really ready, to come in. And this is what I saw… 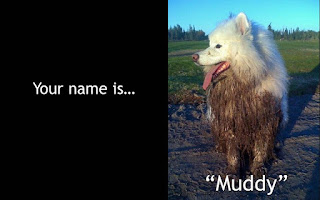 Now, that is not a picture of our Buddy because the first thing I did was not pull out a camera, but run for his collar and a towel. But that’s pretty much what he looked like. He had found some mud and done what looked like a couple or dozen barrel rolls in the mud. And as much as I was horrified, I knew there was only one thing that could come next. Normally he actually keeps himself amazing clean. But this was no ordinary situation. This was beyond what he could do for himself. I would have to clean him up. He is my dog and I am his human. So we had a little heart to heart which I know he didn’t understand, and I got to it. 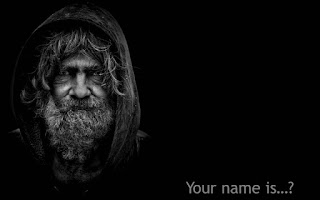 Let me tell you a little bit about leprosy. It’s a disease that’s been around a long time and still exists today. In fact, I’ve met some people with leprosy on some of the international mission trips I’ve done as a teenager and then later as a youth director and pastor. It is a disease that cause you to lose the feeling in your extremities, which means that cuts and scrapes in those places often go un-detected and get infected. That’s what we know now. In ancient times it just looked like people’s fingers and toes, nose and ears, would get really infected and, well, gross. And the way to deal with it back then (and unfortunately in many poorer countries today) is isolation and banishment away from everyone else. The culture of the time as well as the Hebrew scripture described leprosy as a form of being unclean, to be avoided and shunned.

And in the passage for today, a man with leprosy came up to Jesus and beseeched him, pleaded with him, and said, “If you are willing, you can make me clean.” Not “you can heal me,” but “you can make me clean.” The expected response from any healthy person would have been to shout the man away and withdraw to a safe distance. But Jesus interacted with him and, moved with compassion, healed him. Don’t miss Jesus’ motivation… compassion. His heart went out to the man, who had probably lived for years away from family, friends, and loved ones. And note the method of healing. Jesus could have healed with a word, but he chose to TOUCH the man as he made him well. The many probably had not touched or been touched for years and years. And Jesus crossed the cultural chasm to invite him into community as well as wholeness. It is a remarkable exchange!

Let’s look at what ‘clean’ and ‘unclean’ mean in this context. It doesn’t have to do with having had a bath or not, though it may have been common to think of people ravaged by leprosy as dirty or not hygienic. But in Scripture, the status of being ‘unclean’ was more of a ritual status. What do I mean? I mean that so many of the religious laws and rules in the Old Testament were there not as a measure of people’s goodness, but as a teaching tool for a greater spiritual reality. It’s not unlike baptism; that’s a ritual. When we baptize a person in church we aren’t washing the dirt of their body; we are symbolizing being washed CLEAN from sin. Do you hear the word – clean! That means that apart from the grace of God, the thing we are symbolizing in baptism, we are NOT CLEAN.

That’s why Jesus not only healed the man’s physical issues, but also sent him to the priest as a sign of being ritually or spiritually clean. The text also says it is “as a testimony to them.” I’m not sure who ‘them’ is – it could be the Law of Moses or the priests, but I think it’s the public, as a visual and ritual picture of God’s grace. It’s almost like Jesus sent him to be baptized after their encounter. (It was just slightly different, but the same kind of idea.) In addition, though the man was immediately healed and clean, his going to the priest was an act of obedient response; it demonstrated his faith and trust in Jesus. Again, there is power in ritual. Two people are legally and truly married when they sign the wedding license obtained at the courthouse. But we find it meaningful to ritualize that important act in a setting of worship, before God, family, and community. Walking down the aisle, clasping hands, exchanging vows and rings… it all ritualizes reality, physically acting out aspects of commitment and marriage that are more accurately described as spiritual realities. And so, the man went to see the priest to act out the reality of his spiritual cleansing. 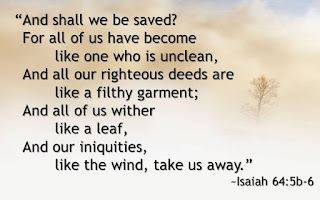 Now if all this sounds unusual and you are thinking it’s a lot to get out of a straightforward story of healing, consider Isaiah’s language in two places. When confronted with the holy presence of God in a vision in Isaiah 6, his response was to fall down and say “Woe is me, I am a man of unclean lips.” He wasn’t talking about a physical smudge. He was describing his heart and his motivation. Later in chapter 64, Isaiah muses about himself and his people:

“And shall we be saved?
For all of us have become like one who is unclean,
And all our righteous deeds are like a filthy garment;
And all of us wither like a leaf,
And our iniquities, like the wind, take us away.”
~Isaiah 64:5b-6

This was the same Isaiah from whose scroll Jesus read. Jesus came to save and to make us spiritually clean because we are God’s people and He is our God and God has compassion on us.

Now I don’t want to distract us from the main thing going on in this story, so I am not going to spend a lot of time on the next part. But it is unusual enough that I don’t want to ignore it. Did you wonder why Jesus told the man not to tell anyone? This isn’t the only time Jesus did this. In fact, some scholars refer to this kind of thing as the” Messianic secret.” Jesus did understand himself to be the Messiah, but at times he seemed to want to keep that under wraps. Maybe another time we can really dig into this, but the short answer is ‘timing.’ There was such a popular expectation and interpretation of what the Messiah would do, that Jesus seemed to be mindful of not having his purpose co-opted. Indeed, on several occasions we read that a crowd swept him up to make him king by force (read, armed conflict against the Romans), but he would slip away. This encounter with the leper, which comes very early in his ministry, shows him to be very careful to let God’s plan for him unfold at the right pace and in the right way. It is fascinating topic, to be sure; but for this morning, it gets us off the main focus of the passage, so I’m going to move on. 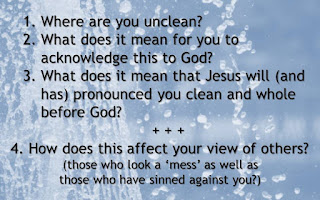 So, I’ve shared a parable of sorts in my cleaning of Muddy the dog, restoring him to his true identity as Buddy. We’ve looked at the encounter between Jesus and a man who was unclean, but more so in regards to his spiritual standing before God than his physical malady. Nonetheless, Jesus made him clean in both senses, confirming in physical reality what was going on spiritually. So again, I’ll ask what this story of Jesus healing a leper has to do with you and me.

And I’d like to end and make application by asking several questions that I hope you will ponder, not just in these moments, but throughout this week. Jesus does forgive our sin once and for all, but like Buddy, I keep rolling around in the mess of this world. So consider these questions:

Where are you unclean?

What does it mean for you to acknowledge this to God?

What does it mean that Jesus will (and has)
pronounced you clean and whole before God?

And a final outward-facing question:

How does this affect your view of others?
(those who look a ‘mess’ as well as those who have sinned against you?)

May God give us ears to hear and hearts to seek and follow Jesus. Amen!

Previous
Stored Up for Good
Next
Forgiven and Healed