I remember learning about the five-act play back when I was in high school. It is a common structure in the Western world; it is found, among other places, in Shakespeare’s plays. It looks like an upward arc, with the climax in the middle. Today I want to share God’s story with you in five acts.

Interestingly enough, that story is just the opposite of one of Shakespeare’s plays. It looks instead like a downward arc or a ‘U’, both in terms of the plot, but also literally in terms of the action involved. And as long as that story is – the whole Bible – it is also captured very succinctly in our text from Philippians 2 today. I’d like to walk you through that and then ask the “so what” question at the end. It’s an epic story, and one I believe to be true. What difference does it make in my life and in yours? 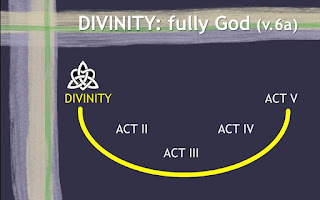 I’ll start back in Philippians 2:6, which was also part of our reading last week. In that verse we read that Jesus “existed in the form of God.” There are other places to see this same thing. The Gospel of John opens with talking about Jesus as the Word who was with God and who was God in the beginning. As fully God, Jesus was part of the creation. In Genesis we also read that God’s Spirit was hovering over the waters. I realize that the concept of the Trinity – that God is one being and three persons – is hard to grasp. And really, it’s beyond the scope of today’s sermon. What I do want to highlight from Philippians 2:6 is that Jesus was (and is) fully God. 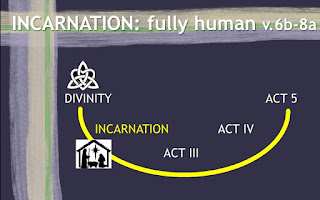 But if you’ve spent time in church or in the Bible you know what immediately follows: Jesus is also fully human. And Philippians 2 goes on in the rest of verses 6, 7, and 8, to say a bit about what we call the Incarnation. In fact, Philippians gives us a glimpse into Jesus’ humanity that we don’t get in the same way in the Gospels. At Christmas we celebrate the story of the Incarnation. Jesus is called “Emmanuel” (God with us) and is born in humble circumstances to live among humanity. But Philippians characterizes the incarnation in a particular way, one that we’ve seen reinforced in recent weeks and in the events leading up to the cross.

Verse 6 says of the divine Jesus that he did not “grasp” after equality with God and he “emptied” himself. It is interesting that the first sin in the Garden of Eden is described as Adam and Eve literally grasping for the fruit, but in doing so also grasping after a form of equality with God. The serpent said that if they ate the fruit they would know what God knew… and so they reached. Jesus did the opposite. In order to come among us, he released his divinity and took the form of a human being. Said another way, the one who was God came all the way down to be with us and to be one of us. He got tired, hungry, felt pain, and wept among us.

That selfless love of others rooted in love of God was what he affirmed from the Jewish scriptures. It was what he taught about in parables like the Good Samaritan. And it is what he demonstrated in actions like washing the disciples’ feet. Jesus not only practiced what he preached; his entire incarnation was enacting that message of selfless love, mercy, and compassion. These are the same traits that we are to emulate when Paul writes, “Have this attitude which was in Christ Jesus.” (v. 5) 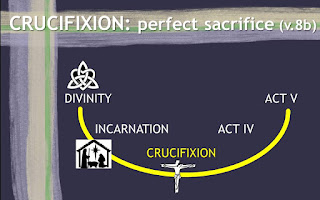 In the second part of verse 8 Paul writes that Jesus “humbled himself by becoming obedient to the point of death, even death on a cross.”  This is what happened on Good Friday… good because of the rescue accomplished on the cross; terrible because of the costliness of that act. Paul emphasizes the physical costliness of it, not just speaking of Jesus’ death, but adding “even death on a cross.” But Paul also describes it in two other ways: as humility and as obedience. In fact, this is what our humanity is supposed to look like. God made human beings and declared them good. We were made in God’s image, with all the dignity that entails. But when our first parents, and we after them, grasped after what God declared out of bounds, we deformed and suppressed that goodness and that image.

Jesus was perfectly obedient, in a way that we cannot be. As such, his death accomplished what ours could not: the forgiveness of sin. And he brings us along with him. It’s not like we become perfectly good when we believe or follow Jesus. Rather, it’s as if when we face God Jesus says, “He is with me! She is mine!” His obedience, his righteousness becomes ours. Scripture variously describes that as credit (reckoned to us), clothing (robes of righteousness), adoption (brought into God’s family), and more.

What began good was lost, but now reclaimed! You’d think that would be the highlight of the Christian story. But it’s not. As scripture says, God has “more than we could think or imagine in store.” Often Easter is summarized as “Jesus dying on the cross.” But that was Friday; Easter was yet to come! 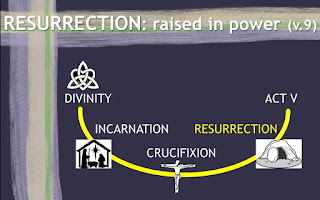 Verse 9 says that “for this reason” (the humble obedience unto death) God “highly exalted Him.” There are two things joined together there in ‘exalt’. One is Easter and the resurrection. I’ll get to the second thing in a moment. Exalt means “to raise up” and that’s what God did. Sin and death did not have the final word. Jesus defeated death such that scripture is almost taunting: “Death, where is your victory? Death, where is your sting?” (1 Corinthians 16:55)

Here’s how I like to distinguish Friday’s cross from Sunday’s empty tomb: the cross means a clean slate, debts paid, sin forgiven; the empty tomb is a new start, a future, what comes next. The cross is like being released from prison after the sentence was paid. Resurrection is the new life that begins after that release. Once we reach Easter morning, there’s a new story being written in our lives. The cross is mercy: not getting what we deserved. The empty tomb and resurrection is grace upon grace: getting what we did not deserve. 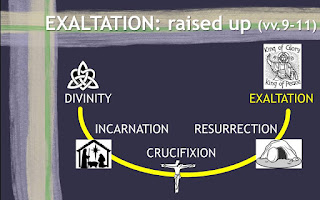 I said there are two things in God’s exaltation of Jesus in verse 9. The other is restoring Jesus’ glory, power, and authority in eternity. It’s what he did not grasp on to in order to come among us. But God raised him back up to it such that at his name “every knee will bow… and every tongue confess that Jesus Christ is Lord, to the glory of God the Father.” (vv.9-11)

This is a picture of eternity. And Jesus is on the throne, not as a scary divine dictator, but precisely (remember “for this reason”) because of his selfless, humble obedience to the Father in loving humanity. That’s the climax of God’s story: a redeeming and restoration of the goodness of creation, with the Triune God at the center of it all.

What Difference Does this Make in My Life? 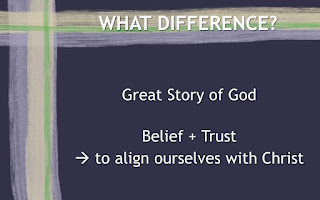 I don’t ask it as a flippant or disrespectful question, nor do I think you would. I believe God’s story is different than reading an epic like The Oddyssey or Greek mythology. I believe God’s story is different because it is not just a grand myth or great fiction, but it contains our story, the one we are actually living. And if I can focus on the middle three acts of this five-act story, that’s what we’ve been focused on for the last six weeks here at Good Shepherd. It’s okay if you weren’t here; I’ll summarize. We’ve been in Philippians 2 this whole time and the main point is to orient our lives around Jesus.

This great story of God is the reason why. God has come after us out of love and invites us to a new start and a new life. HOW we do that is through Jesus Christ, through trusting him and orienting our lives on him. He will not lead you astray, but will always bring you home. And following him is God’s best for you, whether the circumstances of life are good or bad. Whether in joy or grief, success or failure, confidence or confusion, God’s best is for us to be fully aligned with Jesus… with his humility, his compassion, his selflessness, and his love. That’s what I mean by TRUSTING him. You can believe the story is true, but trusting includes following.

Come, all who are weary and heavy-laden; his yoke is easy and his burden light. In him you will find rest for your soul. Amen.

Previous
Servant-King
Next
God at Work in You